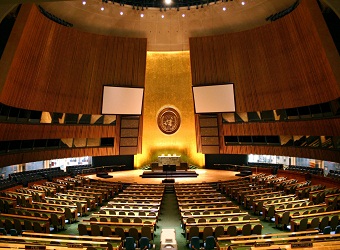 The United Nations General Assembly began talks on Friday on a draft resolution that would demand an end to fighting in Syria amid frustration by some states and rights groups over U.N. Security Council deadlock on the nearly six-year conflict.

More than a third of the 193-member General Assembly this week asked for a formal meeting to be held on Syria. Diplomats said the meeting was likely to be held next week, when the Canadian-drafted resolution could be put to a vote.

General Assembly resolutions are non-binding, but can carry political weight.

“We believe that it is necessary for the General Assembly to express it collective will in accordance with the U.N. Charter and to take actions on the situation in Syria,” Canada, Costa Rica, Japan and the Netherlands wrote to General Assembly President Peter Thomson on behalf of 74 countries.

The draft resolution would express outrage at the escalation of violence in Syria, particularly in Aleppo, where the United Nations says more than 250,000 people have been trapped for months. It would demand aid access, an end to indiscriminate and disproportionate attacks and an end to sieges.

Under a 1950 resolution, an emergency special session can be called for the General Assembly to consider a matter “with a view to making appropriate recommendations to members for collective measures” if the Security Council fails to act.

Only 10 such sessions have been convened, and the last time the General Assembly met in such a session was in 2009 on Israeli actions in occupied Palestinian territories.

A coalition of more than 220 civil society groups from some 45 countries, including Amnesty International, Human Rights Watch, Oxfam and Save the Children, on Thursday declared that the Security Council had failed to protect the people of Syria and called for a General Assembly emergency special session.Syrian ally Russia has vetoed five Security Council resolutions on Syria since 2011. China joined Moscow in vetoing the first four resolutions.For several weeks the 15-member council has been discussing a resolution drafted by Egypt, Spain and New Zealand that would demand a 10-day truce in Aleppo. A vote has not yet been scheduled and Russia currently opposes the text.