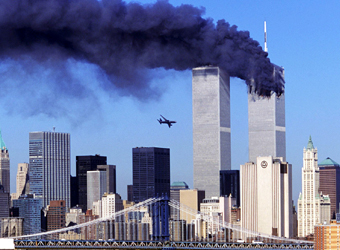 Two Saudi banks, along with businesses related to the family of Osama bin Laden are facing more than $4 billion in lawsuits over the September 11, 2001 terror attacks. Reuters reports the plaintiffs are more than two dozen US insurers.

The lawsuit was filed Wednesday night in U.S. District Court in Manhattan by more than a group of United States insurers affiliated with the insurance holding company Travelers Cos, added Reuters.

The move follows a decision by Congress last September to override a veto by then-President Barack Obama and allow U.S. citizens to sue foreign governments.

Included among the defendants is the National Commercial Bank, in which the Saudi government, through its Public Investment Fund, holds a majority stake. The bank is listed alongside Al Rajhi Bank, Saudi aviation firm Dallah Avco, Mohamed Binladin Co., and multiple charities.

The lawsuit accused them of having “aided and abetted” the attacks, which killed nearly 3,000 people when hijacked planes crashed into the World Trade Center, the Pentagon and a Pennsylvania field, through a variety of “activities in support of al-Qaeda” over a number of years. “But for the assistance provided by defendants, Al-Qaeda could not have successfully planned, coordinated, and carried out the September 11th attacks, which were a foreseeable and intended result of their material support and sponsorship of al-Qaeda,” the lawsuit read.

The lawsuit, which seeks at least $1.4 billion of compensatory damages, triple damages as well as punitive damages, is just the latest legal move from the families of the victims of the deadliest terror attack ever on U.S. soil.

Congress’ decision to pave the way for such action last year was the only successful override of an Obama veto during his eight years in office. And the passing of the Justice Against Terrorism Act (JATSA) was swiftly criticized by Obama, who said it would put U.S. officials in other countries in danger and subject to similar legal challenges.

It was also condemned by the Saudi government, which had long lobbied against such action.

“We believe after due consideration by the new Congress and the new administration, that corrective measures will be taken,” Energy Minister Khalid al-Falih told The Wall Street Journal.

IS death toll hits 90 from huge US bomb in Afghanistan

In its 4th round, Biker Zone launches the colours of adventure