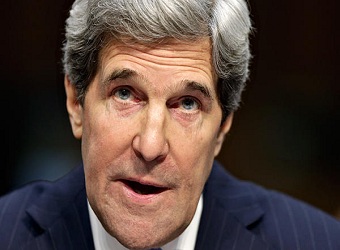 The U.S. is resuming some of the military aid to Egypt it halted last year, including delivery of 10 helicopters, after certifying that the country is abiding by its peace treaty with Israel and combating terrorism.

Secretary of State John Kerry informed his Egyptian counterpart of the decision to certify Egypt yesterday, said State Department spokeswoman Jen Psaki. While reaffirming Egypt’s strategic ties with the U.S., Kerry stopped short of verifying to American lawmakers that Egypt is moving toward democracy following the ouster of its president last year.

“He is certifying to Congress that Egypt is sustaining the strategic relationship with the United States,” Psaki said in a statement. “He urged Egypt to follow through on its commitment to transition to democracy -– including by conducting free, fair, and transparent elections.”

The U.S. suspended some military aid to Egypt after democratically elected President Mohamed Mursi was deposed in July. Kerry is scheduled to meet today in Washington with Egypt’s intelligence chief, Mohamed Farid El-Tohamy, and his announcement came a month before the Arab world’s most-populous country holds presidential elections.

U.S. law requires suspension of aid to countries in which the government is deposed in a coup d’etat, though the Obama administration stopped short of calling Mursi’s ouster a coup.

The U.S. halted delivery of fighter jets and other military gear and withheld $260 million of cash support for the Egyptian government “pending credible progress toward an inclusive, democratically elected civilian government through free and fair elections,” Psaki said in October.

The suspensions in response to Mursi’s ouster halted the delivery of about eight F-16s, built by Lockheed Martin Corp., along with the 10 Apache helicopters made by Boeing Co.

The U.S. has given Egypt about $1.3 billion a year in military aid as a byproduct of the U.S.-brokered Camp David agreement of 1978, when Egypt split from its Arab neighbors and agreed on a separate peace treaty with Israel.

Kerry told Egyptian Foreign Minister Nabil Fahmy in a phone call yesterday that Egypt is “countering transnational threats such as terrorism and weapons proliferation — and that Egypt is upholding its obligations under the Egypt-Israel Peace Treaty,” Psaki said.

Even so, Kerry “noted that he is not yet able to certify that Egypt is taking steps to support a democratic transition,” she said. In addition to calling for transparent elections, Kerry urged Egypt to ease restrictions on the media and on free expression and assembly, she said.

The State Department and Pentagon didn’t specify when the helicopters would be delivered or how much other aid to Egypt would be restarted. Kerry’s certification to Congress is required under U.S. law to resume the flow of suspended aid, Kirby said.

Former Defense Minister Abdel-Fattah al-Seesi, who led Mursi’s removal, stepped down as armed forces chief in March to run for president in next month’s election.

Obama has tried to walk a fine line with Egypt, seeking to balance support for a longtime ally with a desire to back democratic principles that its new military-led government has shunned.

“No transition to democracy comes without difficulty, but in the end it must stay true to the will of the people,” Obama said in a July 3 statement. “An honest, capable and representative government is what ordinary Egyptians seek and what they deserve.”