US tanks and troops to begin arriving in Poland 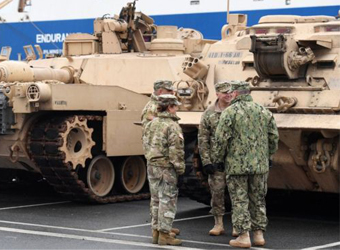 US tanks and armoured vehicles along with more than 3,000 US soldiers start arriving in Poland on Thursday.

They are part of President Barack Obama’s response to reassure Nato allies concerned about a more aggressive Russia.

Their arrival comes just days before the inauguration of Donald Trump who has signalled he wants to improve relations with Moscow.

It is the largest US military reinforcement of Europe in decades.

More than 80 main battle tanks and hundreds of armoured vehicles have already arrived in Germany and are now being moved into Eastern Europe by road and rail.

The US Armoured Brigade will also carry out military exercises in the Baltics, all part of President Obama’s response to Russia’s intervention in Ukraine and to reassure nervous Nato allies.

The plan is to rotate forces every nine months.

But the election of Donald Trump has raised questions as to whether this heightened US military posture will continue, BBC Defence Correspondent Jonathan Beale reports from Poland.

Mr Trump’s nomination for defence secretary – Gen James Mattis – is likely to be asked about the new administration’s attitude to Russia in his Senate confirmation hearing later on Thursday.