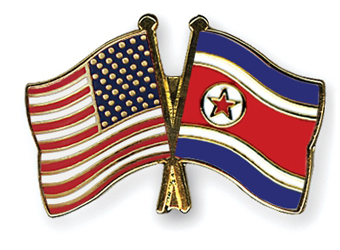 U.S. defence secretary warned North Korea on Friday that his government would respond to any use of nuclear weapons by the communist state against America or its allies with what he described as an effective and overwhelming response.

James Mattis made the comments while in South Korea on his first official overseas visit since ascending to the post on January 20, according to a report in the Associated Press.

“North Korea continues to launch missiles, develop its nuclear weapons program, and engage in threatening rhetoric and behavior,” Mattis said, standing alongside his South Korean opposite number, Han Min Koo, during a press conference in the country’s capital Seoul.

“We stand with our peace-loving Republic of Korea ally to maintain stability on the peninsula and in the region,” he further stated.

“America’s commitments to defending our allies and to upholding our extended deterrence guarantees remain ironclad: Any attack on the United States, or our allies, will be defeated, and any use of nuclear weapons would be met with a response that would be effective and overwhelming,” he also added.

Secretary Mattis used the official visit to reaffirm the new administration’s commitment to the longstanding cooperation between the two countries as represented by a defence treaty, despite rhetoric adopted by President Donald Trump during the election campaign suggesting the pact represented a poor deal for the U.S.

The meeting between the defense counterparts also broached discussion of a timetable for implementation of the Theater High-Altitude Area Defense system (THAAD).

This is an advanced U.S. missile defence system which carries the ostensible goal of improving the protection of South Korea and Japan as well as  troops stationed in these nations, from a potential missile attack from North Korea.

Mattis’s continued push for THAAD to be deployed comes despite doubts held by South Korean authorities due to concerns over the domestic and international political sensitivity of the programme. This as the Asian nation is preparing for upcoming national elections.

“THAAD should be a worry to no nation other than North Korea,” affirmed Mattis, in comments taken as a reference to China’s objections to its implementation in South Korea.