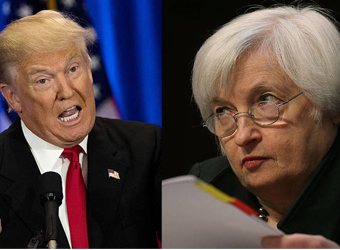 The Federal Reserve will wait six months before raising interest rates again, according to a survey of top economists that suggests policymakers will maintain a cautious approach to tightening policy until they see the economic package US president-elect Donald Trump has promised.

Officials will raise the Fed’s key short-term rate just twice in 2017, starting with a move in June, an FT survey of 31 Wall Street economists found. The findings come days after the central bank pushed its official rate higher for only the second time since the financial crisis and rattled bond markets by projecting three further moves next year.

“Global growth will improve next year but remain under its long term trend,” said Gregory Daco, an economist with Oxford Economics. “Mr Trump’s policies, and the expectation of them, will be pivotal to global developments.”

The property magnate’s US election victory last month helped end a record-breaking debt rally that had pushed interest rates across developed economies to fresh lows over the summer. Investors and traders are anticipating that working with a Republican-controlled Congress, Mr Trump will be able to deliver tax cuts and fiscal stimulus that turbocharges the US economy.

However, the FT survey found that economists expect the gloss Mr Trump can add to US growth next year and in 2018 to be modest. The US will grow an additional 0.2 percentage points in 2017 thanks to a stimulus package from Mr Trump, putting overall expansion at 2.2 per cent, economists project. In 2018, Mr Trump’s contribution will be 0.4 percentage points, pushing GDP growth to 2.3 per cent.

In recent years, financial markets have been sceptical of the trajectory for interest rates that the Fed lays out in its quarterly dot plots. This year, for example, the central bank began forecasting four interest rate rises but delivered just one.

However, following the Fed’s December meeting, interest-rate futures now put the odds of policymakers following through on three rises in 2017 at 46 per cent. That brings the expectation of financial markets closer to the Fed’s own forecasts than they have been all year.

The sharp move in bond yields last week underlines that markets are taking the Fed’s projections more seriously. The yield on the two-year Treasury jumped as high as 1.3 per cent, the highest level since 2009, while an important short-term US dollar money market rate, three-month libor, on Friday approached 1 per cent for the first time since 2009.

Economists’ view of the Fed’s key interest rate in 2018 are more varied, with three quarters of those polled spread between predicting a further two, three and four quarter point increases. The median projection for the target range for the Fed’s funds rate at the end of 2018 is between 1.75 per cent and 2 per cent.

“The federal funds rate should be brought up to normal at a steady state,” said Chris Rupkey, chief economist of MUFG Union Bank.

The FT conducted its survey between December 15 and 16.