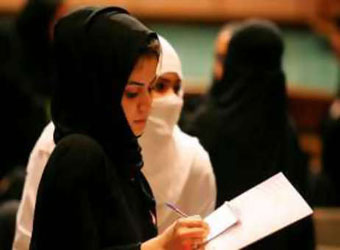 Saudi Arabia and the UAE host nearly three-fourths of the total women labour force in the GCC, with just over 26 per cent of the region’s female workforce participating in the labour market, according to a report.

According to a report by Al Masah Capital Limited, about 1.5 million women have joined the work force in the region in the first decade of the 21st century, increasing from 1.8 million to 3.3 million, marking an 83 per cent spike. Today, they assume leadership positions in the political, social and economic spheres besides making their presence felt in senior management roles in the corporate and private sector.

Despite the steady progress, the report said women’s participation in the labour market is still on the lower side due to local traditions and customs. Women comprise 41 per cent of the total population but only contribute 16 per cent of the labour market and there is need to explore this untapped potential of the job market in the region, the report said.

“The GCC region has 17.7 million females. Those in the working age group [15-plus years] total 12.1 million. Of this, 3.3 million are employed. Consequently, female participation rate in the workforce in the GCC stands at 27 per cent,” the report said adding that there is a huge difference between literate [working age] women and women with jobs, which need to be reduced to boost the economic activity in the region,” it said.

“The GCC region has nearly 10.2 million literate women in the working age group. Of this, 3.3 million have jobs, while about 6.9 million are unemployed or prefer not to work. This untapped potential of educated women is a huge loss to the economy and the society.”

Al Masah firmly believes there are many safe options for this wealth to be invested. “These women of high worth should consider putting some of this wealth to use in entrepreneurial projects or ventures,” Al Masah chief executive Shailesh Dash told Khaleej Times.

He quoted a study by the International Finance Corporation, which disclosed that 33 per cent of enterprises owned by women in the UAE generated over $100,000 a year, compared to just 13 per cent for similar firms in developed nations such as the US.

“Forums such as Al Sayedah Khadijah bint Khuwailid Businesswomen Centre at the Jeddah Chamber of Commerce and Industry and Emirates Business Women Council could play a major role here. The GCC’s female entrepreneurs also seem to be more successful and they bring a certain new zest to the table,” he added.

Women’s wealth is mostly invested in safe asset classes such as cash or bank deposits and bonds, which is why some financial institutions have been quick to take steps to benefit from this situation. Financial institutions have attempted to put this money to better use by providing ladies-only bank branches and establishing targeted funds such as the TNI Dana Women Fund.

Citigroup Chairman Parsons to step down in April