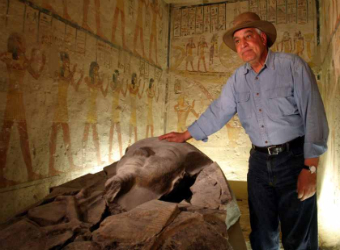 The superstar archaeologist and former secretary-general of the Egyptian Supreme Council of Antiquities (SCA) has been accused by officials at the council of illegally acquiring a fortune of some $14 million kept in US banks.

This is not the first time such accusations have been levelled at Hawass, but past investigations cleared him of such charges.

Hawass has gained prominence in international media throughout his career, appearing in several documentaries and television series, including Chasing Mummies: The Amazing Adventures of Zahi Hawass, which was aired on the History Chanel in 2010.

In April 2011, Hawass, who had recently been re-appointed as antiquities chief in the newly-formed cabinet of then prime minister Essam Sharaf, was sentenced to serve one year in jail for refusing to fulfil a court ruling over a land dispute. He was also relieved of his governmental duties and ordered to pay a LE1,000 fine.

Hawass had initially resigned from his ministerial post when he was criticised for his close ties to ousted president Hosni Mubarak.

The SCA appealed the court ruling, arguing that the land in question included monuments and should therefore be treated as government-owned land.

Awarded a doctorate in Egyptology from the University of Pennsylvania in 1987, Hawass is the author and co-author of several books, his latest being Ancient African Kingdoms on the Nile: Nubia, released in 2012.

He was profiled as one the world’s 100 most influential people by Time magazine in 2006.

New Law to Lure Investors to Egypt Could Feed Corruption