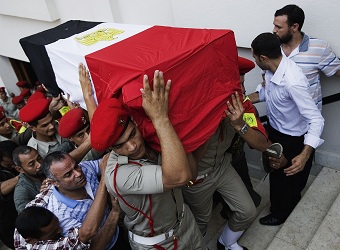 Two Egyptian Copts were killed on Wednesday by unknown assailants in North Sinai’s Al-Arish, only two days after the Islamic State (ISIS) militant group in Egypt released a video vowing to carry out attacks against the Christian community in Egypt.

According to Al-Ahram reporter in North Sinai, the bodies of the two men, believed to be from the same family, were found on a roadside in Al-Arish.

The Associated Press reported that Egyptian security officials identified the two slain men as Saad Hana, 65, and his son Medhat, 45.

No group has yet claimed responsibility for the Wednesday attack.

In the same video, the IS group also vowed to liberate Cairo, signaling their will to carry out more terror attacks around the country.

The group has carried out most of their deadly attacks in Egypt in the past three years in North Sinai against police and army personnel, killing hundreds.

The Egyptian army, which has been waging a war against the Islamist insurgency, has killed hundreds of militants in intensified comprehensive military campaigns in the governorate.

The 20-minute video titled “Fight All Idolaters” also show the last statements reportedly made by the suicide bomber who blew himself up in Cairo’s St. Peter and St. Paul’s Church on 11 December 2016, killing 29 Coptic Christian worshippers, mostly women and children.

This is not the first time that Copts in North Sinai have been killed  by Islamist militants.

In July 2016, Father Rafael Moussa of the Mar Girgis church in Al-Arish was gunned down by ISIS.

“ISIS was able to successfully target the priest Moussa Azmi, known as Rafael, who fights Islam,” the militant group said in a statement after the murder.

Ansar Beit Al-Maqdis, the Islamist group waging the insurgency in North Sinai, has changed its name from Sinai Province to the ISIS in Egypt.

The group also killed many civilians in the Al-Arish and North Sinai for cooperating with security forces.