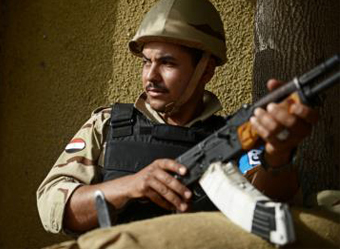 Eight “terrorists” were killed in a firefight with police in the Eastern Desert on Monday, according to state-run news agency MENA.

Citing a security source, MENA said the deadly exchange of fire took place at a “terrorist hideout” near the Sohag-Safaga Highway in Upper Egypt.

The source said the police headed to the location to conduct arrests based on information from the National Security body.

The militants opened fire at the police unit, prompting a firefight, said the source.

The source didn’t specify whether the alleged militants were affiliated to any particular group.

The police seized firearms and ammunition used by the militants and notified the public prosecution to conduct an investigation into the incident, MENA said.

Islamist militants, mainly based in North Sinai, have stepped up attacks against police and army personnel since the 2013 ouster of Islamist president Mohamed Morsi.

Egypt has been battling waves of militant attacks in the Sinai Peninsula, centered mainly in North Sinai’s Rafah, Shiekh Zuewied and Arish cities.

However, militant attacks have also taken place in other parts of the country, including the capital and the Delta area.

While there have been no militant attacks in Upper Egypt in recent years, the police and military occasionally conduct raids there, confiscationg weapons, ammuntion and drugs.