ABK is the best new banking brand in Egypt: The Banker 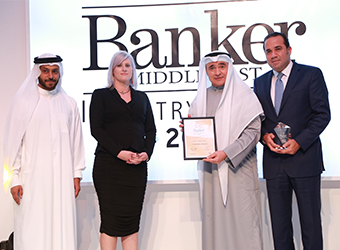 The award is in recognition of the ABK’s exceptional turnaround and significant growth achieved after the acquisition of Piraeus Bank Egypt and the prompt rebranding under the name ABK – Egypt.

Ali Marafi, ABK- Egypt Chairman; and Khaled El Salawy, ABK-Egypt CEO and Managing Director, have received the award during a ceremony held on May 11 at the Emirates Tower Hotel, Dubai.

ABK – Egypt recorded considerable growth in all its key performance indicators, with total assets growing by 62 percent, loans by 82 percent and customer deposits by 50 percent, a true testament to the new successful management approach.

“We stand proud today of this achievement and grateful for the recognition received by Banker Middle East, after less than 2 years of operations as ABK – Egypt. ABK is a solid financial institution and since it has expanded its presence in the Egyptian market, it has set new horizons for what it aspires to achieve and has created a more powerful force to drive its vision to reimagining a simpler bank and its mission to consistently provide experiences that simplify and enrich people’s lives.” Marafi said.

El Salawy also emphasized on the great value of this award and reinforced the bank’s commitment to rolling out the Simpler Banking strategy across ABK – Egypt operations through offering the products and services that cater to our customers’ needs.

He said: “The success of our brand in Egypt is due to the seamless transition that took place post the acquisition and the swift change adapted across our branch network. We are proud of what we have achieved to date and we look forward to the next phase of our journey.”

ABK – Egypt was established when ABK acquired Piraeus Bank Egypt in 2015, as part of the Group’s plans to expand its regional presence, reinforce the Bank’s competitive position and provide additional value to clients and stakeholders.