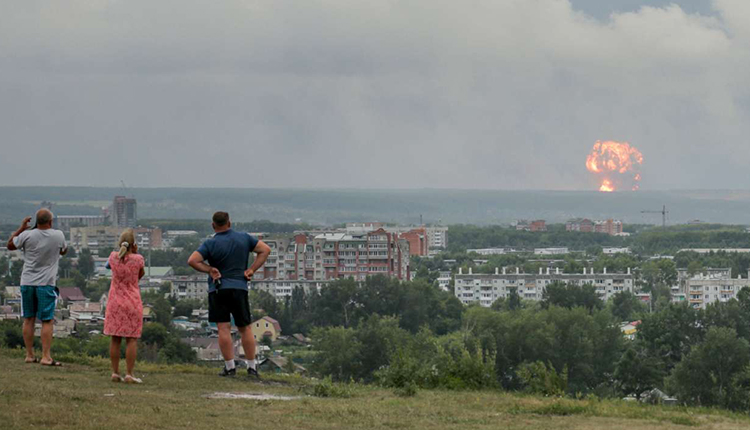 At least five nuclear experts have been killed in a mysterious explosion during a rocket engine test at sea in northern Russia on August 8.

Officials have been slow to release information about Thursday’s blast, which led to a radiation spike up to 16 times in a nearby city and sparked heightened demand for iodine.

Here’s what it’s known so far about the explosion according to new stories compiled by Reuters and the Moscow News.

The rocket’s fuel caught fire, causing it to detonate and knock several people into the White Sea, the state nuclear agency Rosatom was quoted as saying by the state-run TASS news agency. The explosion took place at around 6:00 a.m. on August 8, according to one expert’s reading of nuclear data.

Officials in the nearby city of Severodvinsk said radiation had briefly spiked without saying how high, but their statement was taken down on Friday without explanation. Regional media reported that local residents had begun stocking up on iodine, which is used to reduce the effects of radiation exposure.

Authorities said after the incident they had shut down part of a bay in the White Sea, although public shipping information from the port of Arkhangelsk showed the area had been closed for the preceding month. It did not say why.

What are Russian authorities saying?

The involvement of nuclear workers was acknowledged for the first time by Russia’s state nuclear agency Rosatom on Saturday. It said three of its staff members have been hospitalised.

On Monday, Rosatom CEO Alexei Likhachev said staffers at its affiliate nuclear center died during testing of an unspecified “new special diesel.” Likhachev added that Rosatom will “finish” works on new weapons systems without specifying what weapons he was referring to.

In a video interview published late on Sunday, Russian officials at the nuclear research institute where the scientists had worked said the accident had caused a twofold rise in radiation levels that had only lasted an hour.

The Kremlin on Tuesday gave its first official comments on the incident, with spokesman Dmitry Peskov saying that the authorities would do everything in their power to ensure citizens’ safety.

What is the media reporting?

St. Petersburg’s Fontanka.ru news website quoted a video statement by one of the leaders of the nuclear center as suggesting that the blast occurred at a “compact nuclear reactor.”

Fontanka later updated its report with a statement from Rosatom which said that the suggestion referred to “tests of a radioisotope power supply,” not a “reactor.”

“It’s a nuclear battery, just so you understand,” the state nuclear monopoly was quoted as saying.

Vyacheslav Solovyev, one of the officials at the institute in the closed city of Sarov, said: “These developments are also actually happening in many countries. The Americans last year…also tested a small-scale reactor… Our centre also continues to work in this direction”

Russian media have said the rocket engine explosion may have occurred at a weapons testing area near the village of Nyonoksa. Those reports say an area near Nyonoksa is used for tests on weapons, including ballistic and cruise missiles that are used by the Russian Navy.

Authorities recommended an evacuation of the Nyonoksa test site while work is conducted, according to reports from multiple news agencies. The recommendation was rescinded hours later, adding to the uncertainty and confusion surrounding Thursday’s incident.

“This is a load of rubbish, there is no evacuation of any kind,” he told the Interfax news agency.

Also, in an apparent clash with the Russian weather service Roshydromet’s report, the country’s Defence Ministry insisted that no radiation had been released.

Medics who treated victims from the accident have been sent to Moscow for medical examination, TASS news agency cited an unnamed medical source as saying on Tuesday. The medics have signed an agreement promising not to divulge information about the incident, TASS cited the source as saying.

An image released by a small satellite firm appears to show the Serebryanka, a ship that carries nuclear fuel and waste, offshore from the Nenoksa Missile Test Site. Its presence “may be related to the testing of a nuclear-powered cruise missile,” Jeffrey Lewis, a nuclear scholar at the Middlebury Institute, wrote on Twitter.

The five scientist were buried with honours on Monday, with Rosatom director Alexei Likhachev praising them as “true heroes” and “pride of our country.”

Meanwhile, Sergei Kirienko, Russian President Vladimir Putin‘s deputy chief of staff, said the five who perished at the plant would be posthumously awarded with top medals.

As many as six other staff members were injured and transported by helicopter to Moscow to be treated for radiation exposure, the Baza Telegram channel reported. The workers were brought from the airplane to a Moscow hospital in vehicles wrapped in film, the Telegram channel added. Rosatom has said that three people were injured in the blast.

The Sarov city administration announced two days of mourning, saying Sunday the experts died while “performing a task of national importance.” Russia held a memorial service for the five scientists on Monday.

Source: The Moscow Times and Reuters