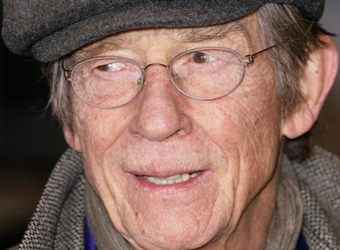 Veteran British actor Sir John Hurt has died at the age of 77, his agent has said.

The Bafta-winning star, known for his roles in Alien and The Elephant Man, had been treated for pancreatic cancer in 2015.

US director Mel Brooks described Sir John as cinematic immortality, as tributes poured in for the star.

Despite being given the all-clear for cancer, he last year pulled out of play The Entertainer due to ill-health.

Sir John decided not to perform as Billy Rice in Sir Kenneth Branagh’s production on the advice of his doctors.

Brooks paid tribute to Sir John, who had starred in his comedy Spaceballs, saying on Twitter: “No one could have played The Elephant Man more memorably.”

“He carried that film into cinematic immortality. He will be sorely missed.” He added.

Author of the books, J K Rowling, tweeted: “So very sad to hear that the immensely talented and deeply beloved John Hurt has died. My thoughts are with his family and friends.”

Stephen Fry praised Sir John for being great on the stage, small screen and big.

“It was such an honor to have watched you work, sir.” Lord of the Rings star Elijah Wood said.

British actor Alfred Molina said Sir John was a gloriously talented actor, one of the best, of this or any era.

John Hurt was one of Britain’s best-known and most versatile actors.

He was born on 22 January, 1940 in Chesterfield in Derbyshire. Over six decades, he appeared in more than 120 films as well as numerous stage and television roles.

He went to St Martin’s School of Art in London before gaining a scholarship to the Royal Academy of Dramatic Art in 1960.

The death of his character in the film Alien has often been voted as one of cinema’s most memorable moments.

The film critic and historian Geoff Andrew once asked Hurt how he managed to regularly turn in such memorable performances.

“The only way I can describe it is that I put everything I can into the mulberry of my mind and hope that it is going to ferment and make a decent wine,” he said.

“How that process happens, I’m sorry to tell you I can’t describe.” He adde.

Sir John was knighted in 2015 for his services to drama.

“I can’t say I worry about mortality, but it’s impossible to get to my age and not have a little contemplation of it.” He told the Radio Times after his cancer diagnosis at the same year.

“We’re all just passing time, and occupy our chair very briefly.” He said.

In 2013, he appeared in Doctor Who as the War Doctor, a hitherto unseen incarnation of the character.

He was still working up until his death, starring in Jackie Kennedy biopic Jackie, thriller Damascus Cover and the upcoming biopic of boxer Lenny McLean, My Name Is Lenny.

He was also filming Darkest Hour, in which he starred as Neville Chamberlain opposite Gary Oldman’s Winston Churchill, scheduled to be released in December.

He has been married to Anwen Rees Meyers- a former actress and classical pianist- for 12 years.

Theresa May to discuss trade on Turkey visit with Erdogan