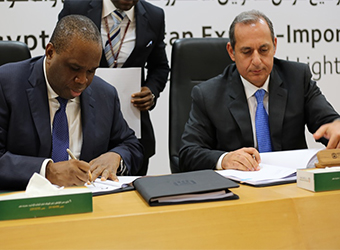 Benedict Oramah, President of Afreximbank, and Hesham Okasha, Chairman of NBE, signed the facility agreement for the Industrialization Support Facility in Cairo on April 27.

The facility will support Egypt’s small and medium-size enterprises (SMEs) initiative, launched by President Abdel Fattah al-Sisi in 2016 to provide EGP 5 billion in loans to medium-sized companies in the industrial and agricultural sectors, Oramah said.

“As SMEs are major employers of labour in any economy, we expect this facility to boost employment and overall welfare of the Egyptian people.” Afreximbank’s chairman added.

Being a hard currency facility, the facility would make it possible for beneficiaries to access essential investment goods from the international market to improve their competitiveness, he said.

Granting of the facility demonstrated Afreximbank’s commitment to the Egyptian economy and reflected the confidence of the Egyptian authorities in the Afreximbank as a key financing partner, Oramah noted.

According to the statement released on Saturday, since inception in 1993, Afreximbank had approved credit facilities totaling $13.8 billion to Egyptian entities, representing 33.7 percent of the total facilities approved by the bank.

Over the same period, the bank confirmed and issued guarantees and letters of credit exceeding $2 billion on behalf of Egyptian entities.

Afreximbank currently has an outstanding credit portfolio of about $4.2 billion for Egypt, Oramah said.

The agreement was part of a $3.5 billion financing programme approved by Afreximbank in December “aimed at enabling the bank’s member-countries to adjust to current adverse economic shocks, especially commodity price and terrorism-induced ones,” the bank said.