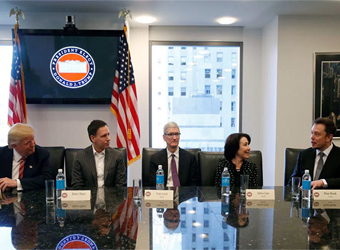 Apple, Google and Uber on Friday issued official statements regarding President-elect Donald Trump’s proposed Muslim registry, each saying they would not assist in building or providing information for creating such a database.

In statements obtained by BuzzFeed News, the three tech giants were unsurprisingly opposed to the idea of generating and maintaining a list of users based solely on their religious beliefs.

“We think people should be treated the same no matter how they worship, what they look like, who they love. We haven’t been asked and we would oppose such an effort,” an Apple spokesman said.

Apple has long been a vocal advocate of equality, publicly pushing for diversity in the workplace and beyond.

A spokesperson from Google was even more emphatic, saying, “In relation to the hypothetical of whether we would ever help build a ‘muslim registry’ – we haven’t been asked, of course we wouldn’t do this and we are glad – from all that we’ve read – that the proposal doesn’t seem to be on the table.”

Facebook and Microsoft offered similar sentiments earlier this week, saying they would not participate in the building of a Muslim registry.

Amazon and Oracle, however, declined repeated requests for comment on the matter. The CEOs of both companies were in attendance at Trump’s high-profile tech summit on Wednesday, at which Amazon chief Jeff Bezos was said to be particularly concerned about Chinese relations.

Apple CEO Tim Cook was also present and sat just two seats away from the President-elect, next to Trump’s Silicon Valley evangelist Peter Thiel.Oracle’s refusal is perhaps more understandable, as CEO Safra Catz just yesterday joined Trump’s transition team. That said, Uber CEO Travis Kalanick, who was not invited to the summit, is among a cadre of business advisers who are scheduled to meet with and directly advise Trump. SpaceX and Tesla CEO Elon Musk is also part of that group.

During his campaign, Trump proposed building a registry of all Muslim Americans, potentially with the help of tech companies and other services providers, in an apparent bid to curb what he framed as “radical Islamic” terrorism on U.S. soil. Since then, however, both Trump and his transition team have seemingly distanced themselves from the initiative.