The British Council in Egypt celebrated its 80th anniversary Thursday evening at its headquarters in Agouza, Giza.

“Today, we are not only celebrating 80 years in which the British Council has offered knowledge, skills and world-class education to thousands of young Egyptians. We are also celebrating the brilliant students who have reached top-of-the-world results, and are leading their country to a prosperous future.” Sir Geoffrey Adams, UK’s ambassador to Egypt said at the event.

The UK ambassador has also delivered a message from Queen Elizabeth II to the British Council in Egypt on its 80th anniversary.

“As your patron, I have great pleasure in sending my congratulations to the British Council in Egypt on your Eightieth Anniversary. Over the years, the British Council’s work in Egypt to encourage the sharing of knowledge and ideas has created opportunities for the people of both countries and built our mutual understanding. The ties between our two countries are important, and I welcome the continued contribution of the British Council in Egypt. On this notable anniversary, I send my good wishes to you for the continued success of your important work.” Queen Elizabeth II’s letter said.

Elizabeth White, Country Director said at a briefing: “Being appointed the new Director of the British Council in Egypt during such a momentous year has been marvellous. While I’ve been looking at the future development of the British Council, I’ve also had a chance to look deeply into our history, and where we have come from. So much has changed, but some things remain constant.”

“It gives a real sense of purpose to see how generations of Egyptians have taken up the opportunities we offer in the arts, education, science and sports.” White added. 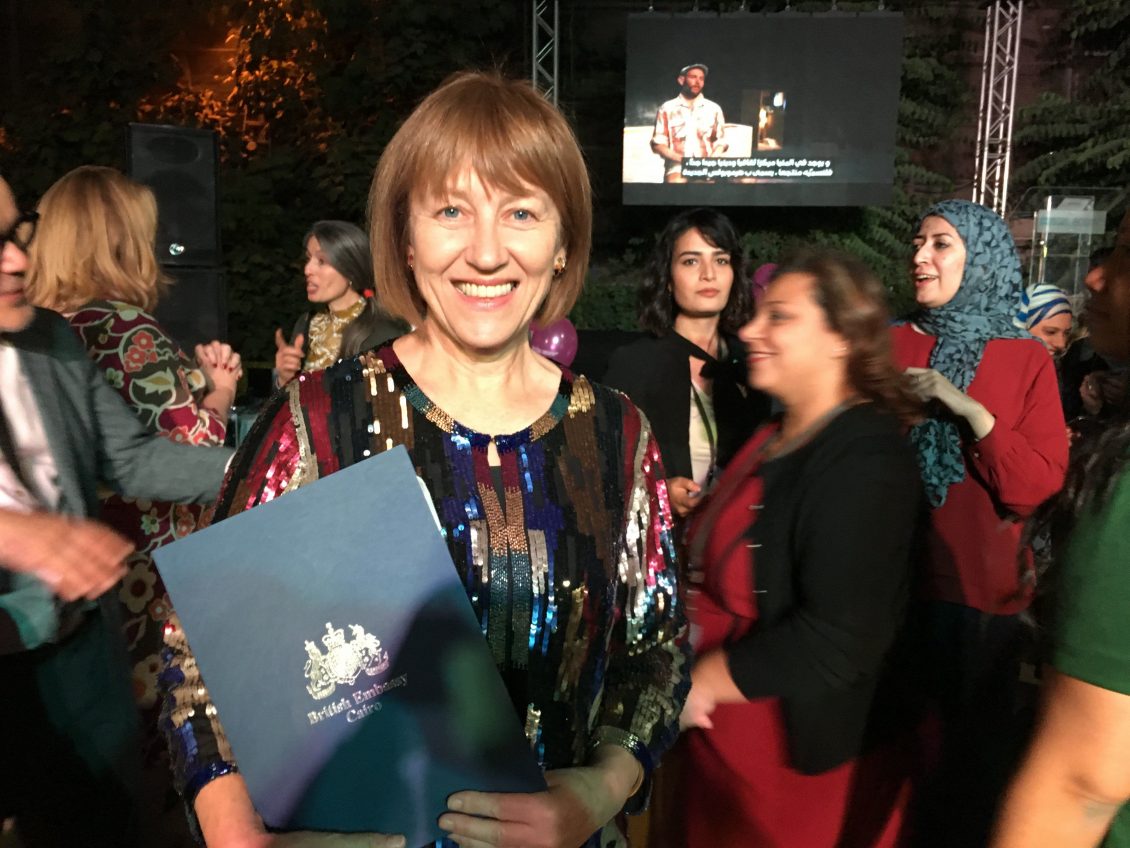 The council has hosted partners from the academic, government, art, and social enterprise communities.

The event was attended by several artists, including Asir Yasin, Bushra and Azza Fahmy, which included a moving exhibition of photographs that show the history of the British Council over the past eight decades and highlighted the changes that have affected its activities in recent years.

The exhibition chronicled the evolution of the British Council and the highs and lows of the relationship between the UK and Egypt.

Attendees included representatives from Egyptian government and academic institutions such as ministry of education, youth and sports, higher education, and antiquities, in addition to the Arab Academy for Science, Technology and Maritime Transport.

The Ministry of Education partners with the British Council, to deliver the National Teacher Training Programme that expects to train 37,000 teachers by 2020. The programme maximises its reach, through the application of digital technology, and deepens impact by exposing teachers to best practices from peers, in regional and global networks.

Additionally, the Ministry of Youth and Sports supports the British Council’s football coaching programme “Premier Skills”, aimed to develop children on a social and educational level, in communities across Egypt. Delivered by Premier League coaches every year in Egypt, the programme touched the lives of over 60,000 children in 2017 alone, and helped coaches establish community sports centres in remote areas like Qena, Sohag, Luxor, Aswan, and Sharkeya.

Meanwhile, the Ministry of Higher Education, Ministry of Antiquities, and the Arab Academy for Science, Technology and Maritime Transport partner with the British Council and the British government to deliver the Newton Mosharafa programme. The programme aimed to develop the capacity of academics involved in science and innovation. Funded equally by the Egyptian and British governments with a total of £50 million ($64.2 million), it sponsors post graduate studies and research programmes for Egyptians at UK universities, in the fields of sustainable water and renewable energy management, sustainable food production, heritage and archeology, culture and health care.

Recently, the programme helped Egyptians discover an early diagnosis method for Hepatitis C, which proved pivotal in improving the quality of lives for millions of Egyptians.

The anniversary event was the start of three days of activity.

The Council celebrated in Upper Egypt on Friday, as the Country Director, White attended the closing ceremony of the British Council’s ‘1000 Girls, 1000 Dreams’ football partnership with the Ministry of Youth and Sport in Luxor.

Furthermore, the British Council will be holding on Saturday public events in Citystars mall and at the El Sawy Culture Wheel, concluding the celebrations with a performance by the award-winning UK artist Nadine Shah.