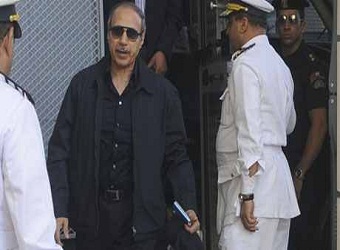 The court sentenced Adly; Nabil Khalaf, Head of the ministry’s Central Administration of Finances and Budget; and Ahmed Abdel Nabi, Senior Researcher at the same administration to seven years in prison each, and ordered them to repay around 196 million pounds, also fining them the same sum.

In addition to these sentences, Adly, along with nine other defendants, was ordered to repay the government 529 million pounds.

Adly and the 12 other defendants were referred to criminal court in August 2015 over charges of illicit gains while serving in government posts.

The defendants are accused of using their influence to acquire illicit gains amounting to 2.4 billion pounds, close to $300 million at the exchange rate of the time, while Adly was interior minister.

Adly served as Mubarak’s minister of interior from 1997 until 2011. He was released from detention in March 2015, after being acquitted on charges of using his political influence to acquire illicit gains amounting to 181 million pounds.

In 2014, he was acquitted along with six of his aides and former president Hosni Mubarak on charges of complicity in the killing of protesters during the January 2011 uprising.

In a separate case, Adly also saw an initial 12-year sentence and 15 million pounds worth of fines dropped over charges of corruption and money laundering.