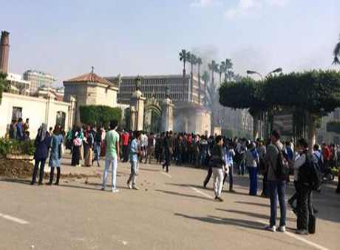 A 13-year-old boy has been shot dead at a pro-Morsi student protest in Beni Suef.

The National Alliance to Support Legitimacy called for nationwide demonstrations on Wednesday to denounce the “military coup” against Islamist president Mohamed Morsi.

Amr Mohamed Ali Kafaty, 13, was standing in front of the Beni Suef University campus when clashes erupted between police and students, the health ministry said.

Five other students have been injured at protests: three at Beni Suef University and two at Al-Azhar University, the health ministry added.

The alliance claims two students have been killed at Beni Suef University and one at Alexandria University, but these are unconfirmed.

An eyewitness at Cairo University told Ahram Online that police were stationed outside the university, occasionally firing teargas inside the campus.

Dozens of students have arrested at protests across Egypt.

Students formed human chains at a number of universities, but were quickly dispersed by the police.