China accuses some US officials of inciting ‘chaos’ in Hong Kong 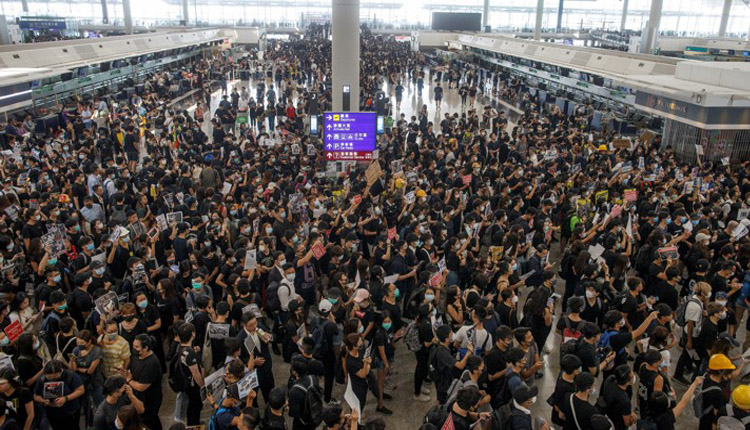 “The U.S. denied on many occasions its involvement in the ongoing violent incidents in Hong Kong. However, the comments from those members of the U.S. Congress have provided the world with new and powerful evidence on the country’s involvement,” Foreign Ministry Spokesperson Hua Chunying said, according to an official translation of her remarks.

A host of public statements show it’s accurate to say American officials have been commenting about Hong Kong — which has seen increasing violence between pro-democracy protesters, counter-protesters, and police. Still, Hua accused U.S. politicians of intentionally distorting their assessments and spurring clashes.

“By neglecting and distorting the truth, they whitewashed violent crimes as a struggle for human rights and freedom, and deliberately misinterpreted the work of Hong Kong police as violent repression when the police were only enforcing the law, fighting crimes and upholding social order,” she said.

“They even incited the Hong Kong residents to engage in confrontation with the (special administrative region) government and the central government,” Hua added. “How anxious are they to instigate and see chaos!”

U.S. President Donald Trump said in a Tuesday Twitter post that he “can’t imagine why” anyone would blame the United States for “the problems” in Hong Kong.

The ongoing protests can be traced back to March when thousands marched against a proposed bill that would allow Hong Kong to extradite people to mainland China.

Although the former British colony has been part of the country since 1997, it’s designated as a Chinese “special administrative region” and has been allowed a degree of autonomy in legal and financial matters.

That arrangement has been known as “one country, two systems” and it guides Hong Kong’s constitutionally enshrined mandate that the city will maintain its “previous capitalist system” for 50 years after it officially rejoined China.

Given that background, many in Hong Kong said the proposed extradition law would erode their city’s autonomy. Hong Kong’s leader, Carrie Lam, eventually announced the government would indefinitely halt the bill, but protests continued as demonstrators called for it to be officially withdrawn and for an investigation into police actions.

As hundreds of thousands, by some counts, have continued to take to the streets, the messages have increasingly become about democracy, autonomy and even independence.

That’s been a red line for China’s leadership, and Beijing mouthpieces and officials have repeatedly emphasized that Hong Kong’s relationship with the rest of the country is not up for discussion. And that’s the topic now inducing the Foreign Ministry’s criticisms of U.S. officials.

“We solemnly remind you this plain truth: Hong Kong affairs are entirely China’s internal affairs, and you are neither entitled nor qualified to wantonly comment on them,” Hua said Tuesday. “Mind your own business and stay out of Hong Kong affairs.”

Pelosi, for one, has issued several statements about Hong Kong. In an Aug. 6 message, she wrote that “the people of Hong Kong are sending a stirring message to the world: the dreams of freedom, justice and democracy can never be extinguished by injustice and intimidation.”

The Democratic leader reiterated earlier calls for the White House “to suspend future sales of munitions and crowd control equipment to the Hong Kong police force,” saying that “Democrats and Republicans in Congress stand united with the people of Hong Kong in demanding the hopeful, free and democratic future that is their right.”

In recent Twitter posts, Pelosi said she’s alarmed to see the local police “intensify their use of force against the protesters and label them violent criminals,” and she urged Lam “to meet with protest leaders to listen and act on their legitimate grievances including withdrawing the extradition bill, ending police violence & granting universal suffrage.”

McConnell, meanwhile, said on Twitter that “the people of Hong Kong are bravely standing up to the Chinese Communist Party as Beijing tries to encroach on their autonomy and freedom.” He added that “any violent crackdown would be completely unacceptable.”

In a corresponding statement, the Senate leader said Beijing should seek to “emulate” Hong Kong and its freedoms — not “remake it in the image of the Chinese Communist Party.” He characterized the violence as “increasingly brutal police tactics and pro-Mainland vigilantes … drawing blood in an effort to intimidate Hong Kongers back into submission.”

“The world is watching and wondering: If a government cannot respect the basic rights of people it claims as its own citizens, why on Earth would it be trusted to respect the rights and interests of its neighbors, its trading partners, or the companies that invest in its economy?” McConnell said. “As we all know, the people of Hong Kong have been carrying this banner for decades. And I’m proud to say that here in the United States, we’ve been marching alongside them the entire way.”

More protests have been planned for the rest of the week.