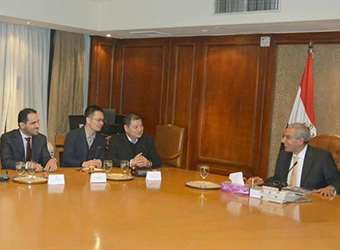 Egyptian government will allocate a 16,000 square-metre area in the industrial zone of Ataqa in Suez Governorate, Minister Tarek Qabil said according to an official press statement by the ministry on Sunday.

The factory will start actual operation within 9 months after its establishment, Qabil added.

The Egyptian partner for the project is WellBond, which is an Egyptian-Saudi company manufacturing aluminium composite panel, currently produces 600,000 metres per year covering 8-9 percent of Egyptian market’s needs, he stated.

The Chinese company aims to “benefit from the available major competitive advantages represented in the [Egyptian] market that exceeds 90 million consumers, and also benefit from several free trade agreements signed between Egypt and several countries and main economic clusters worldwide, which allows for a production of goods at economical prices for more than 1.6 billion consumers,” the statement reads.