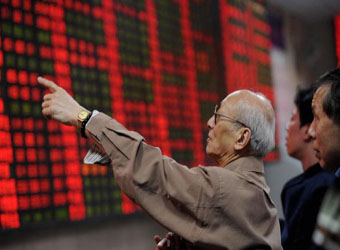 Mainland China markets extended declines of more than 2 percent seen on Monday, with the Shanghai composite down 0.73 percent and the Shenzhen composite slipping 0.57 percent.

The recent sell-off in Chinese shares can be attributed to the “Fed rate hike decision…which is causing temporary risk-off sentiment in China and Hong Kong markets,” said Margaret Yang, market analyst at CMC Markets, in a note on Tuesday.

Yang also pointed to tightening regulatory requirements of Chinese insurers’ stock investments, and the recent comments from U.S. President-elect Donald Trump on “One China”, which has investors worried.

activity picked up in November.

Retail sales last month rose more than expected at 10.8 percent year-on-year, compared to the forecast 10.1 increase in a Reuters poll, while November factory output were up 6.2 percent from a year ago, versus the expected 6.1 percent uptick. Private investment growth were 3.1 percent higher, from 2.9 percent in January to October.

The Nikkei 225 was up 0.29 percent after wavering between negative and positive territory for most of the session.

Japan Display, one of Apple’s smartphone display suppliers, was up 10.63 percent at 354 yen per share. The display maker had raised its stake from 15 percent to more than 50 percent by the end of 2017 in Joled, an organic light-emitting diode (OLED) display manufacturer, the Asian Nikkei Review reported. Joled is the result of a merger between Panasonic and Sony’s OLED business units.

Hong Kong’s central bank introduced an ad valorem stamp duty rate tax of 15 percent on all residential property as a cooling measure, which could hit investment demand in the real estate market, according to a research note by OCBC Bank on Monday.

Moreover, “the pace of Federal Reserve’s rate hikes may accelerate amid a post-Trump world given Trump’s fiscal stimulus. This will also translate into higher borrowing costs in HK, which as a result will further curb the demand in the property market,” the report showed. Higher interest rates in the U.S. would result in a stronger dollar, and the Hong Kong currency is pegged to the U.S. dollar.

In South Korea, the Kospi was up 0.16 percent. Investors will continue to eye the state-of-play over President Park Guen-hye, who was impeached by parliament last week in connection with an influence-peddling scandal. South Korean Prime Minister Hwang Kyo-ahn has assumed presidential authority as caretaker pending a top court ruling on the impeachment.

The Fed is largely expected to raise interest rates for the first time in a year, with the market pricing in a 95.4 percent probability according to CME Group’s FedWatch Tool. But investors are focused as well on the economic outlook tone of the post-meeting press conference on Wednesday.

“The question we are asking is whether the Fed acknowledges not just the improvement in the recent data flow, but also the view that we could see fiscal measures complimenting an already stretched central bank balance sheet,” said Chris Weston, chief market strategist at spreadbetter IG, in a note on Tuesday.

“The key will then be whether they increase their 2017 and more likely 2018 GDP forecasts from 2% respectively,” Weston said.

The dollar index, which tracks the greenback against a basket of major currencies, was weaker at 100.99 as of 1:35 pm HK/SIN, as the yen slipped against the dollar to trade at 115.12.

Dollar steadies vs yen as Treasury yields come off highs