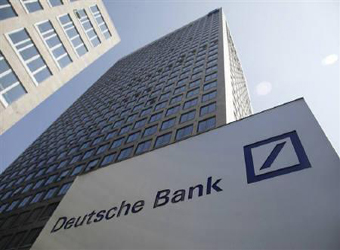 Here are the key third-quarter metrics:

Germany’s flagship bank said further cost reductions had helped profits to more than double in the three months through to September. For the same period last year net profit came in at 278 million euros.

Meantime, revenues at the bank slipped 9.6 percent to 6.8 billion euros in the third quarter. The decline in revenues had been widely expected as low market volatility, depressed trading volumes and a stubbornly low-interest rate environment have hit banks globally in recent months.

“While the revenue environment remained challenging, we have made significant progress on our initiatives,” Chief Executive John Cryan said in a statement.

‘Weaker than the peer group’

Piers Brown, a London-based analyst at Macquarie Research said Thursday that a “poor” performance in Deutsche Bank’s corporate and institutional division was again “significantly weaker than the peer group.”

Shares of the bank were more than 2 percent lower during early morning deals on Thursday.

Deutsche Bank has been hampered with weaker earnings and legal troubles in recent years. In January, the lender agreed to pay a $7.2 billion settlement after the U.S. Justice Department found it had misled investors in its sale of residential mortgage-backed securities.

The Frankfurt-based lender is also in the midst of a major restructuring program, which includes the integration of its Postbank retail bank unit and the partial sale of its asset management unit.

“We are convinced that the benefits of our efforts will step by step become more apparent in the coming quarters and years,” Cryan said.

On Wednesday, Deutsche Bank agreed to pay $220 million to resolve a U.S. investigation into claims it manipulated benchmark interest rates.

China launches another crackdown on the internet