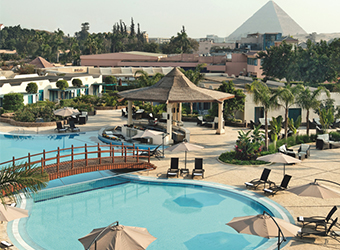 Deutsche Hospitality has extended its portfolio by taking over two more hotels in Egypt.

The Taba Hotel and Nelson Village in Taba and the Cairo Pyramids Hotel in Gizeh with immediate effect strengthen the company’s presence in the country as it continues to expand.

Cairo Pyramids Hotel offers 304 rooms as well as spectacular views of the Pyramids of Gizeh.

Six restaurants and two bars cater to the culinary well-being of guests- who are also able to enjoy a conference and wedding room- a gym, two swimming pools, and a range of shopping facilities.

This makes the hotel both a good destination for holidaymakers seeking adventure and relaxation and the ideal venue for business travellers.

Taba Hotel and Nelson Village lies on the northern end of the Sinai Peninsula directly on the border with Israel.

The unique location occupied by the Taba Hotel & Nelson Village on the Gulf of Aqaba enables three countries to be viewed at the same time- Jordan, Israel, and Saudi-Arabia.

The hotel boasts its own private beach and also houses 401 rooms, including 32 suites. It has a ballroom, a conference room, four differently styled restaurants, and three bars and cafés.

Both hotels will undergo extensive renovation works until the end of the year and will then be operated under the brand Steigenberger Hotels and Resorts.

By having added the two hotels, Deutsche Hospitality has now 99 hotels in operation.

Puneet Chhatwal, CEO Deutsche Hospitality, comments: “Since many years, Egypt has been a good market for our Steigenberger hotel brand. As we believe in the attractiveness of the country as holiday- and business-destination, we have recently expanded our presence in Egypt. Currently, we are operating ten hotels and three cruise ships on the River Nile and the Lake Nasser in the country.“

Agreements for the two hotels have been signed with the owner companies Taba Tourism Development Company (TTDC) and the Tourism Urbanisation Company S.A.E. respectively. Both will be operated via a management agreement.

Essam Abd El Hady, chairman of Tourism Urbanisation Company, the owning company of Pyramids Hotel, says: “We made a bidding to get one of the best hotel chains to manage our hotel, as the mother company of our Group owns several five star hotels all over in Egypt.”

Samir Sadek, chairman of TTDC, the owning company of Taba Hotel and Nelson Village, said: “After an intense bidding process we have selected Steigenberger Hotels and Resorts to manage the hotel.

“Our plan is to invest and renovate the hotel to the highest international standards with a firm belief that tourism in Egypt, and particularly in Sinai, will soon return stronger than ever before,” Sadek concluded.