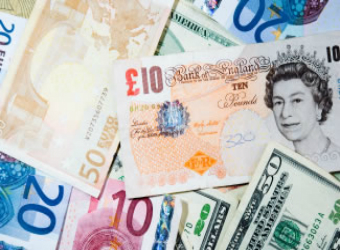 Dollar prices pulled back from one-month highs against a basket of currencies on Wednesday as tumbling oil prices pushed down U.S. yields, while the pound wobbled after Bank of England Governor Mark Carney shot down hopes of an interest rate hike.

The dollar index against a group of major currencies was 0.05 percent lower at 97.699.

It had hit a one-month high of 97.871 on Tuesday as expectations that the U.S. Federal Reserve, which hiked interest rates last week, would tighten policy again in 2017.

The greenback’s advance, however, stalled as the dollar-supportive bounce in U.S. Treasury yields was cut short overnight.

Following a big drop in oil prices, the 10-year Treasury note yield fell sharply on Tuesday, reversing a large portion of the gains it made after the Fed left the door open for another rate increase this year.

“U.S. inflation indicators have not been strong to start with. Now that oil is falling, it could add further pressure to the dollar by weakening sentiment towards the U.S. energy sector.”

While the U.S. currency’s advance may have stopped, some expected the losses to be limited, with the dollar seen eventually resuming its move higher.

“Sentiment towards the dollar may not be great, but participants don’t have strong motivation to buy the yen or euro either given the low-yield policies of the Bank of Japan and the European Central Bank,” said Masashi Murata, senior currency strategist at Brown Brothers Harriman in Tokyo.

“And with Wall Street shares holding near record highs and the Fed seemingly intent on increasing rates, the market would not be in a hurry pass negative judgement on the dollar.”

Sterling wobbled near two-month lows after BoE’s Carney said on Tuesday that now was not the time to raise UK interest rates. Last week three out of eight BoE policymakers voted in favor of a rate hike and raised hopes for a near-term tightening.

Commodity-linked currencies were also on the back foot after U.S. crude oil prices slumped to nine-month lows overnight on global oversupply fears.

The Norwegian crown languished near a five-week low against the dollar after falling about 0.5 percent on Tuesday.

The Canadian dollar, which fell about 0.35 percent overnight, extended losses to trade at C$1.3277 per dollar.

The loonie moved further away from a 3-1/2-month high of C$1.3165 reached a week ago after Bank of Canada’s governor expressed support for an interest rate hike.

Stocks in Asia decline after fall in oil prices