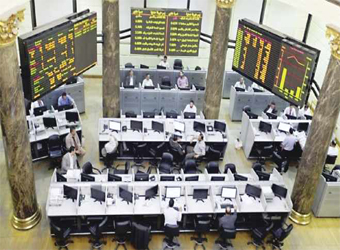 The Egyptian Exchange indices were wavering on red notes during the opening session of Monday.

The trading volume has recorded 61.934 million securities worth EGP 186.629 million, exchanged through 5839 transactions during Monday opening.

Also during the opening session, 118 listed securities have been traded in; 64 fell, 25 advanced; while 29 keeping their previous levels.

The non-Arab foreign and Arab investors were net sellers at early trade on Monday seizing 22.51% and 4.38% respectively of the total markets, with a net equity of EGP 3.166 million and EGP 2.393 million respectively, excluding the deals.

On the other hand, Egyptian investors were net buyers capturing 73.11% of the total market, with a net equity of EGP 5.560 million, excluding the deals.