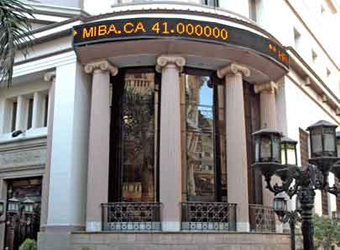 Regarding the corporate news, it was firmed that EFG Hermes (HRHO) announced that it will –jointly with Dubai Mannai Group, a Qatar- based Conglomerate- acquire the entire issued share capital of Damas, the leading jewelry and watch business in the MENA region for 0.45$ per share.

Ezz Aldekhela steel (IRAX) posted a net profit of EGP696.91million for the year ended by the 31st of December 2011.

Orascom Telecom Holding (ORTE) declared that the Algerian court imposed 99 billion Algerian Dinars (about 1.3 billion dollar) as a fine on OTH’s subsidiary in Algeria, Orascom Telecom Algeria, and member of OTA’s senior executive team, and this judgment is related to previous claim on breaching foreign exchange regulations brought in 2010, meanwhile OTH said that it would appeal against the fines.

Algeria’s finance minister stated that the government did not set the price for the planned purchase of 51% of Vimplecom ‘s local mobile phone unit  “Djezzy”, denying what was said that the country will pay $6.5 billion to acquire the stake.

Regarding the sectors; the Travel and Leisure sector topped the losers’ list; decreasing by 9.64%, while the real estate and basic resources sectors followed as losing 5.80% and 5.69% respectively, and Health care sector was the sole gainer by 0.66%.

Oil Firms on Weakened Dollar and Improved US Consumer Sentiment