Egypt Brotherhood Leadership Handed to Mahmoud Ezzat, Aka ‘The Fox’ 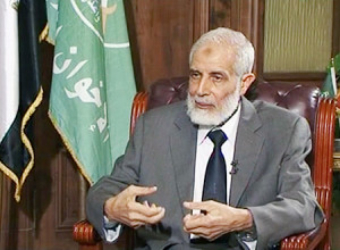 Following the arrest of its top leader, Egypt’s Muslim Brotherhood has named Dr. Mahmoud Ezzat the interim Supreme Guide of the Islamist organization.

Dr. Mohamed Badie, 70, was detained at a residential apartment in Nasr City in northeast Cairo “after information came to the security apparatus locating his place of hiding,” the state news agency reported.

The Interior Ministry’s Facebook page showed a picture of Dr. Badie, with dark rings under his eyes, sitting in a car between two men in black body armor, with a caption confirming his arrest.

“Carrying out the decisions of the public prosecutor to arrest and bring forward the ‘general guide’ of the Muslim Brotherhood, Mohamed Badie, and through collected information and observation of movements, it was possible for the criminal search apparatus under the direction of Cairo’s security (services) to arrest him,” according to the caption.

Dr. Badie was charged in July with inciting the murder of protesters. Together with his two deputies, he is due to stand trial on August 25.

Interior Minister Mohamed Ibrahim stated earlier this morning that Dr.  Badie was arrested in the early hours of Tuesday.

Mahmud Ezzat, also known as ”the Fox”, was born in 1944 and a father of five, and he has in the past headed the Brotherhood’s “secret services”.

a. Position in the movement: deputy general guide (as of January 2010) and head of the Da’wah Dissemination Department (as of February 2010)

b. Personal background: born 1944, Cairo, married to the sister of former general guide Mahdi Akef. Lecturer on medicine at Zagazig University, also worked as a lecturer at Sana’a University in Yemen (in the early 1980s and possibly even prior to that).

c. Background in the movement: member since 1962, elected as member of the Guidance Office in 1981 but is a permanent member since 1995. Formerly the movement’s chairman. Arrested and served several prison sentences (first in 1965-1974; the latest was for three months in 2010).

d. Ideological orientation: considered a prominent representative of the conservative school of thought.

e. Other: considered one of the most powerful, influential personalities in the movement, and the one that pulls its strings.

Amazon.Com Back Up After Going Down For U.S., Canadian Users

Analysis: With Gulf Aid, Egypt Economy Can Limp Through Crisis