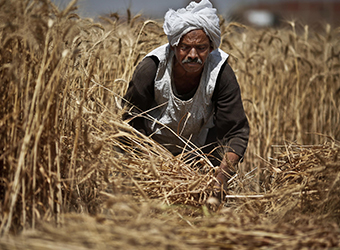 Egypt has procured just over 1.7 million tonnes of wheat from farmers since the start of its local harvest season in mid-April, the supply ministry said on Monday.

The government previously said it plans to buy about 4-4.5 million tonnes of wheat from farmers this season, but in April the supply minister Ali Moselhy lowered the figure to around 3.8 million tonnes. Egypt’s wheat-harvest season lasts for three months.

The world’s top importer of grain has been implementing policies to limit the use of private-sector silos and increase its own capacity to curb smuggling and fraud in the local market.

Farmers are being paid a fixed price of 555 Egyptian pounds ($30.8) per ardeb (roughly 150 kg) of wheat for the lowest quality, while the higher quality will cost 565 pounds and 575 pounds.

The Ministry of Finance is allocating for this season 16 billion pounds to purchase around four million tonnes of wheat.

The Supply ministry further said that its examining committees have rejected 3,445 tonnes of wheat that did not meet the required quality standards.