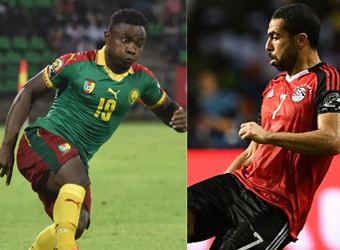 Egypt will attempt to win the fourth consecutive Africa Cup of Nations in which they have competed when they face Cameroon in Sunday’s final.

Underdogs Cameroon has upset the odds to reach the final, beating much-fancied Ghana in the last four.

Cameroon’s squad includes two British-based players, Hearts midfielder Arnaud Djoum, and Clinton N’Jie, although the latter is on loan at Marseille from Tottenham.

The Pharaohs’ hero in the semi-final was 44-year-old goalkeeper Essam El Hadary- whose save in the shootout means he now has a chance to win a fifth Afcon title- having won his first in 1998.

El Hadary has been in fine form in Gabon, the goal he conceded in the semi-final being the first he has let in during the tournament.

The make-up of Cameroon’s squad has changed significantly since the appointment of Hugo Broos as manager in February 2016, but he is confident his youthful line-up can cause an upset.

“In the 29 years I’ve been a coach I’ve never worked with a group like this,” said Belgian, who is hoping to lead the Indomitable Lions to a first Afcon title since 2002 and fifth overall.

“It’s a fantastic group of players both on and off the field and they deserve the final. We’ve shown from the start that we are getting better but it’s still a dream that we’ve got to the final,” Belgian added.