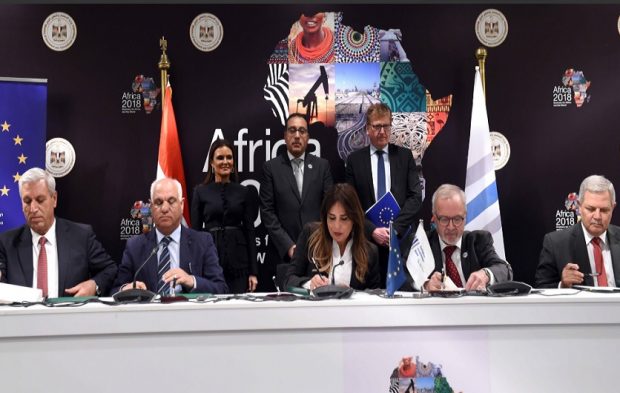 The Egyptian Prime minister, Moustafa Madbouli,  has witnessed the signing  ceremony between the  Minister  of investment and cooperation, Sahar Nasr, and ERBD President Suma Chakrabarti on the side lines of Africa 2018 Forum.

Africa 2018 Forum, one of the biggest gatherings in the continent, kicked off in Sharm El-Sheikh on Saturday, under the auspices of Egyptian President Abdel Fattah al-Sisi.

the Kitchener Drain area is one of the most polluted in the Nile Delta region in Egypt that will experience significant improvements in environmental health because if the joint fund.

It is the EBRD’s first investment in the solid waste sector in Egypt.

The funds will be invested in new waste collection equipment, the rehabilitation and construction of new waste transfer stations, waste treatment facilities and sanitary landfills in accordance with EU standards, Nasr said.

The investment is part of an extensive €715 million programme aimed at depolluting the Kitchener Drain and improving health and environmental conditions in the three governorates that make up the Kitchener Drain watershed, namely Gharbeya, Dakahleya and Kafr El Sheikh.

Egypt is a founding member of the EBRD. To date, the Bank has invested over €4.5 billion in 87 projects in the country since it began investments there in 2012.