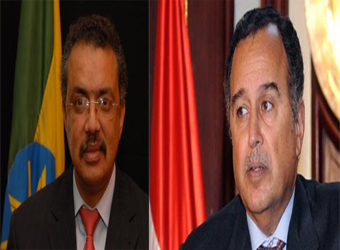 Egyptian Foreign Minister Nabil Fahmy and his Ethiopian counterpart Tedros Adhanom agree on the importance of overcoming recent tension between their countries over a new dam being constructed by Ethiopia over the Blue Nile.

“We either swim together or drown together,” an Egyptian foreign ministry spokesman who spoke to MENA state news agency reported Adhanom as saying.

The Ethiopian minister also reportedly said his country is careful not to harm Egypt’s interests or water rights in the building of the new dam, MENA reported.

In New York for the United Nations 68th General Assembly, the ministers discussed improving bilateral relations between the two countries.

Fahmy said – according to MENA – that Egypt stressed Ethiopia’s right to benefit from its natural resources but that Egypt is greatly concerned about its water security, in the light of what he said was Egypt’s complete reliance on Nile waters.

Adhanom mentioned that Egyptian investment in Ethiopia has noticeably increased and assured that the mutual interests of both countries are increasing, according to the Egyptian spokesman quoted by MENA.

In June, the Ethiopian parliament ratified a treaty designed to ensure its access to Nile water resources, replacing colonial-era agreements that grant Egypt and Sudan the lion’s share of water rights from the river.

Ethiopia’s planned $4.2 billion hydro-electric dam on the Blue Nile has been a source of concern for the Egyptian government, which fears that the project, if completed, could negatively impact the volume of Nile water reaching Egypt.

The issue caused one of the most significant foreign policy crises during the one year rule of ousted Islamist president Mohamed Morsi.
Morsi staged a roundtable discussion in June to listen to suggestions of politicians on ways to resolve the crisis. Unaware the meeting was being aired live, attendees suggested aggressive action against Ethiopia.

Egyptian officials repeatedly announced that talks on the controversial dam are ongoing between Egypt and Ethiopia and were not halted after Morsi’s ousting on 3 July.