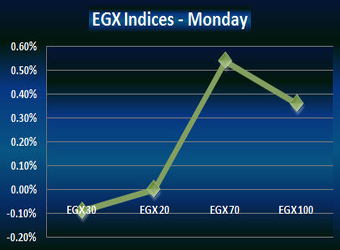 The Egyptian Exchange (EGX) indices were wavering in mixed notes on Monday afternoon.

Turnovers
Through the closing session of Monday, the trading volume has reached 188.781 million securities, with turnovers worth EGP 603.143 million, exchanged through 30.769 thousand transactions.
Also during the closing session, 187 listed securities have been traded in; 93 declined, 79 advanced; while 15 keeping their previous levels.

The non-Arab foreign investors were net buyers capturing 2.87% of the total market, with a net equity of EGP 5.361 million, excluding the deals.

On the contrary, Egyptian and Arab investors were net sellers seizing 93.69% and 3.44% respectively of the total markets, with a net equity of EGP 3.623 million and 1.738 million respectively, excluding the deals.