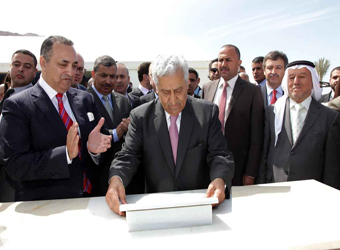 Under the patronage of Jordan’s  prime minister, Laying the foundation stone for one of Egyptian Amer Group’s largest projects in the region.
Under the patronage of Prime Minister. Abdullah Nsour, Amer Group (AMER.CA) – one of Egypt’s leading development companies within the tourism and entertainment sectors with a legacy spanning over 25 years – held on Monday, a cornerstone ceremony to mark the commencement of the implementation phase of the Porto Dead Sea project.

As Amer Group’s newest and largest project in the region, Porto Dead Sea is estimated at a total cost of JOD 800 million overall ($1.125 billion) and JOD 60 million for the initial development phase. The project will generate 6,000 sustainable job opportunities upon its operation, as well as thousands of additional opportunities throughout its construction phase. The ceremony was attended by the Chairman of the Development & Free Zones Commission (DFZC), the Chairman of Jordan Development Zones Company (JDZ), as well a number of prominent Jordanian officials and businessmen.

Porto Dead Sea is one of the largest touristic projects of its kind in the region and among the biggest investments in the Hashemite Kingdom of Jordan. It is also the first tourism city located on the banks of the Dead Sea. In addition to playing an active role in the development of the area, the project is set to positively impact the national economy by supporting the tourism sector. Scheduled to complete its first phase in 2016, Porto Dead Sea will increase Jordan’s overall hotel capacity, attract regional and international investments, as well as create thousands of job opportunities for Jordanians.

The project will offer an expansive suite of residential and touristic facilities spread across 800,000 sqm along the Dead Sea coast. These include thousands of hotel-serviced apartments, 20 global restaurants and cafés, mega malls, an international health and spa center, medical facilities, and an amusement park. Furthermore, the project will feature an equestrian and shooting club, different sports courts, 20 swimming pools – four of which are women-only – in addition to four lakes, the biggest dancing fountain in Jordan, and the first cinema complex in the Dead Sea. Porto Dead Sea will also introduce Amer Group’s highly-acclaimed Papa Porto international Carnivals to Jordan, offering family entertainment throughout the year.

“We are confident that by leveraging our longstanding experience in developing, designing and implementing exceptional, family-oriented tourism and leisure projects, we will present Jordan with a new resort concept, God willing. Our Porto model has already been successfully executed in several countries in the region,” commented Mansour Amer, Chairman of Amer Group. He went on to affirm the Group’s commitment to ensuring that Porto Dead Sea serves as a world class tourism project suitable for the entire family, and that it introduces a paradigm shift in the Kingdom’s tourism sector in general and the Dead Sea in particular, to become the ‘Pulse of the Dead Sea’.

Amer Group recently signed a memorandum of understanding (MoU) with DFZC and the Ministry of Education during a signing ceremony that was attended by H.E. the Minister of Education Dr. Mohammad Thneibat and Amer Group Chairman Mansour Amer. By virtue of the MoU, the Amer Charitable Foundation will donate a hotel vocational training wing to Al Sweimah School with the aim of training new generations of graduates who are qualified to join the hospitality job market.