Egypt’s non-oil private sector activity shrank for the 12th month in a row in November as inflation expectations surge leading new business orders to drop by their fastest space in a year, an IHS Markit survey revealed on Sunday.

IHS Markit’s Purchasing Managers’ Index (PMI) recorded 48.7 below the 50.0 threshold that separates growth from contraction but unchanged from October. 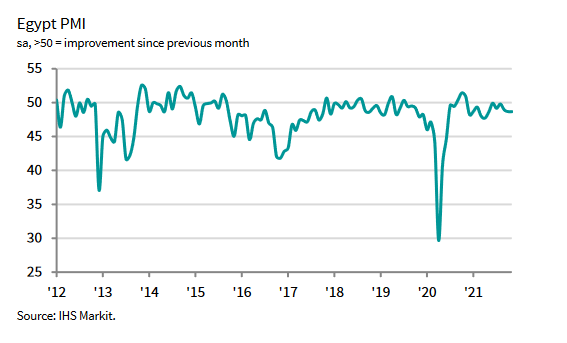 “The decline in business conditions was led by a reduction in output levels in November. Activity fell for the third month in a row, with the rate of contraction largely similar to that seen in October. Panellists mentioned that a loss of client demand and slowdowns due to global supply chain issues were often behind the downturn.”

In addition, the input cost inflation sub-index, at 63.7, was at its second-fastest in over three years, beaten only by October’s 64.5.

The sub-index for future output expectations fell to 60.6, its lowest level in a year compared to 65.0 in October, with higher inflation forecasts weighing on sentiment.

“Higher fuel and shipping costs often led to increased prices, including for raw items such as foodstuff and paper,” IHS Markit stated, adding that companies also raised wages in response to an uptick in living expenses. 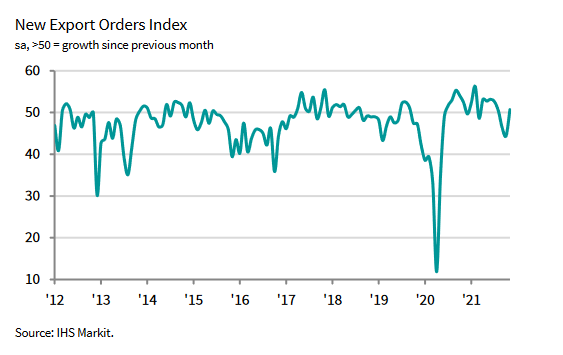 Commenting on the survey results, David Owen, economist at IHS Markit, said: “Inflationary pressures and supply shortages were again the most prominent depressors of Egypt’s non-oil economy in November. Output was down for the third month in a row, matched by a third consecutive decline in new business as higher selling prices deterred client spending in the domestic economy.” “Increased shipping and energy prices continued to burden firms with rising input costs, leaving them to fight for profit margins through a sharp increase in charges. Whilst easing from October, the rate of output price inflation was the second-quickest since mid-2018, providing more ominous signs about the trajectory of consumer prices.”