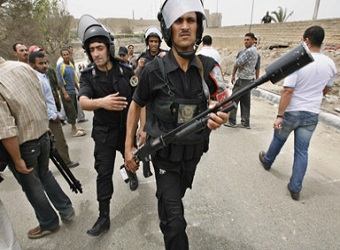 Cairo’s Nasr City prosecution ordered Saturday an autopsy conducted on a engineering student killed during Friday clashes, to ascertain the reason of his death.

Nineteen-year-old Belal Ali Saber was killed as a protest in support of ousted president Mohamed Morsi approached Rabaa Al-Adawiya, the site of a pro-Morsi sit-in that was forcibly dispersed in August leaving hundreds dead.

The prosecution also ordered that immediate investigations be carried out by the National Security apparatus and police detectives, and that a delegation from the criminal lab inspect the police vehicles which supporters of Morsi, including Saber, are accused of attacking with molotov cocktails.

Six pro-Morsi protesters are being questioned by the prosecution regarding the attack on the vehicle.

Students at Ain Shams University gathered Saturday to protest the killing of Saber.

Several protesters took to the streets Friday marking 100 days since Morsi’s ouster. Outside Cairo, limited clashes were also reported in the coastal governorates of Alexandria and Kafr El-Sheikh.

At least 15 protesters were reportedly arrested across the governorates.

Netanyahu Urges Britain And France Not To Ease Sanctions On Iran