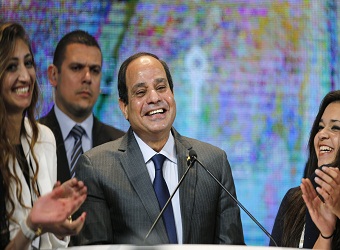 The Saturday event was attended by hundreds of youth and dozens of state officials.

In October, over 3,000 youth from a number of the country’s universities and political parties attended the first annual National Youth Conference in the Sinai resort city of Sharm El-Sheikh.

The Saturday meeting was organised to follow up on the decisions made during October’s conference, which included the formation of a committee to review the cases of youth prisoners for possible pardon.

The participants in the meeting presented a video endorsing Egyptian former diplomat Moshira Khattab for the position of director-general of UNESCO.

“I support the nomination of ambassador Moshira Khattab to the UNESCO, and I call on all Egyptians to support her,” President El-Sisi said on his Facebook account.

The president also presented an exceptional youth creativity award to Mona El-Sayed Ibrahim, known as the “cart girl,” in recognition of her job as a cart wheeler. Last month, El-Sisi received Ibrahim at the presidential palace after a photo circulated on social media of her on the job.

The president praised her efforts and offered her family an apartment.

During the discussion, El-Sisi said Egyptians would not have accepted directing all the country’s resources into improving education, as some countries did, while putting on hold all other development projects.

He also said that the work done in education reform should not be contradicted by the teachings in the mosque or the church, or by the media.

During the second session, President El-Sisi blamed the media for behaving in an irresponsible manner that jeopardises national security.

He said that after the 25 January Revolution, “imports covered 60 to 70 percent of our basic needs, and this required dollars, which taxed our dollar reserves, in addition to the drop in tourism and export revenues caused by the aftermath of the revolution.”

The president also expressed his confidence in the Egyptian people, whom he says rejected calls to take to the streets on 11 November in protest to the surge in prices.

“I had no doubt regarding the response of the Egyptian people. We started the road to reform, and we wish success from God.”