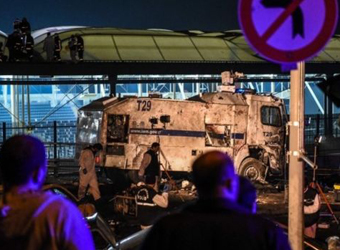 The Turkish government says Kurdish militants appear to be responsible for twin bomb attacks on police outside a stadium in Istanbul on Saturday.

Deputy PM Numan Kurtulmus said initial findings pointed towards the Kurdistan Workers’ Party (PKK), which has targeted security forces in the past.

At least 38 people died when a car bomb and a suicide bomber hit a police truck near Istanbul’s Vodafone Arena.

The bombers struck two hours after a top-division football match there.

Mr Numan told CNN Turk news channel that about 300-400kg (660-880lb) of explosives had been used in Saturday evening’s attack.

“Arrows point” to the Kurdistan Worker’s Party (PKK), he added. No group has said it carried out the bombings.

A wave of attacks in Turkey this year has been carried out both by the PKK and so-called Islamic State (IS), says the BBC’s Mark Lowen in Istanbul.

Turkey is a member in the US-led coalition fighting the Islamic State, and its troops are active in both neighbouring Syria and Iraq.

It is also facing a renewed conflict with the banned PKK in south-eastern Turkey.

Interior Minister Suleyman Soylu said 13 people had been arrested after the latest blasts, but gave no details.

Thirty of those killed were police officers. Dozens of people remain in hospital, some in intensive care.

Turkey has declared a day of national mourning. President Recep Tayyip Erdogan said the explosions had “aimed to maximise casualties”.

But they came two hours after the end of the match between top teams Bursaspor at Besiktas at the Vodafone Arena, is located in central Istanbul.

Local media reported that fans had already dispersed. Bursaspor posted on Twitter that it knew of no injuries to its supporters.