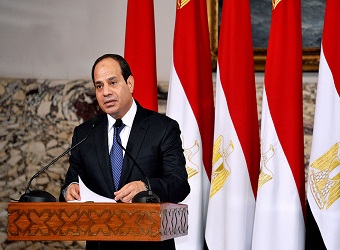 Egypt’s President Abdel Fattah al-Sisi issued Tuesday a decree formally establishing the National Council to Combat Terrorism and Extremism, which will be tasked with establishing institutions and the public” to counter terrorism and its causes, state news agency MENA reported.

The council, which is chaired by the presidency, will include the parliament speaker, the prime minister, the grand imam of Al-Azhar, the Coptic Orthodox pope, as well as a number of ministers, including the defence, religious endowments, justice, interior and foreign ministers.

The Egyptian president first mentioned the formation of the council in a speech to the nation in mid-April following twin terrorist attacks that targeted churches in Alexandria and Tanta, killing 46 people and injuring dozens.

The council is tasked with implementing a comprehensive national strategy to combat terrorism and extremism, both at home and abroad, as well as to coordinate with religious institutions and security agencies to spread moderate religious discourse in the face of radical ideologies.

It will also be responsible for “amending existing legislation to address obstacles facing access to justice as well as facilitating coordination and cooperation between all security and political bodies and with the international community, especially neighbouring countries,” according to the decree.

The council also seeks to coordinate Arab positions on terrorism-related issues, and to establish a regional inter-Arab entity to this end.

“The council will also take necessary legal measures against nations that support terrorism against the Egyptian state,” the decree says.

The council will also suggest security plans and legal strategies and follow up on their implementation, and will hold a meeting every two months or whenever necessary, according to the decree.

In early July, a three-month nationwide state of emergency, which was first implemented in April following the church attacks, was extended by parliament.

Egypt is battling an Islamist insurgency mainly concentrated in the restive northern part of Sinai. However, Islamist militants have recently carried out attacks in other parts of the country, mainly against police and army personal as well as Coptic Christian civilians.

Twitter no longer at death’s door as earnings report approaches