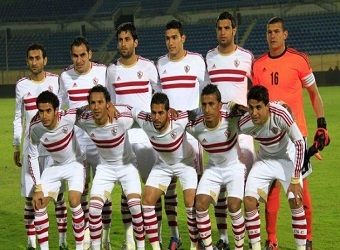 Zamalek will now have to wait till the final round of the Champions League Group B after being stunned 3-1 by a below-par CAPS United side in disappointing fashion in Harare on Saturday.

Going into the game looking for a win to improve their position ahead of the final home game against Ahli Tripoli, Zamalek were not helped by some sloppy finishing in front of goal and poor defending at the other end.

Arguably against the run of play, Ronald Pfumbidzai gave the home side the lead just one minute after the half-hour mark, before Stanley Ohawuchi leveled the scoring just one minute before half-time.

With now Zamalek back into the game and supposedly eyeing the winner, it was the Zimbabweans who scored twice through striker Abbas Amidu – who struck at death his side’s third.

Zamalek did not lose hope of qualifying though, with them having to wait till the final round as they should beat Ahli Tripoli, while hoping CAPS do not mount a surprise and beat USM Alger in Algiers.

Inacio Augusto’s men have now slipped to the bottom of their group on five points, one adrift of CAPS and three behind Ahli Tripoli and group leaders USM Alger.

With the opening stages seeing both teams resorting for ineffective long balls, Zamalek were the first to pose real threat on goal through midfielder Ahmed Tawfik after 20 minutes.

Tawfik, a central midfielder in Inacio’s 4-3-3 format, was found by a superb back-heel from Shikabala inside the area but the former blasted over the bar.

Just two minutes later, winger Ohawuchi came close to scoring the opener when he ran unopposed towards goal before seeing his effort blocked by the keeper.

With Zamalek coming close to scoring and eventually squandering their chances, it seemed likely they were going to be punished by their unfancied opponents – which exactly happened in the 31st minute.

After center-back Mahmoud Hamdi cleared a cross away towards the right, full-back Shawki El-Said was caught napping, allowing Pfumbidzai to strike past keeper Ahmed El-Shennawi from inside the area.

Inacio intervened by introducing playmaker Ayman Hefni instead of holder Ibrahim Salah, who deputized for the suspended Tarek Hamed, and indeed the talented midfielder stamped his mark on his side’s much-awaited equalizer.

A silky through pass was latched onto by Ohawuchi, who ran through on goal before seeing the keeper get a hand into his strike that eventually flew into the net.

The second half began and Hefni was clearly the architect of Zamalek’s attacks, playing another delightful lofted through pass towards Ohawuchi – who failed to control the ball inside the area eight minutes after the restart.

The match calmed down, with Zamalek strangely seemingly uninterested to score another goal, with manager Inacio forced to substitute full-back El-Said who looked totally poor.

With now Tawfik switched to full-back position, the Whites did not look much better defensively when Amidu was found unmarked inside the area to strike past El-Shennawi after the center-backs were dragged out of position.

Much to Zamalek’s misery, the hosts’ second of the evening came right after lone striker Hossam Salama was denied a legitimate goal allegedly for offside.

Inacio interfered again, this time replacing his another out-of-sorts full-back Mohamed Nassef with Mostafa Fathi, as the Cairo side now switched to a three-man defense format.

Zamalek piled up the pressure late on, with Fathi and Shikabala occupying the opposite flanks in an attempt to service forwards Hossam Salama and Ohawuchi.

But a counter-attack in stoppage time compounded the Cairo giants’ woes, with Amidu again evading defender Tawfik to break clear before beating keeper El-Shennawi, who looked reluctant to come out of goal and confront the Caps striker.