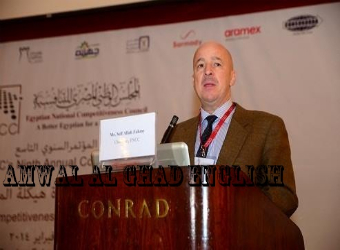 In a keynote speech at the ENCC’s 9th Annual Conference kicked off today in Cairo, Fahmy clarified that the targeted financing schemes are designated for major developmental projects in Egypt, notably in fields of infrastructure and energy.

However, the official said the ENCC was determined to carry out its financing plans with the current interim government represented in the former deputy prime minister Dr. Ziad Bahaa El-Din before his resignation alongside 5 other ministers. Hence, the financing plans were halted, and will be resumed following the upcoming parliamentary and presidential elections.

Egypt is currently in dire need for major projects in entire sectors so as to bring about radical positive change in the daily lives of citizens, Fahmy noted.

ENCC’s chairman also stressed the deteriorating competitiveness situation in Egypt since the country ranked 108th out of 148 countries in the Global Competitiveness Index (GCI) issued by the World Economic Forum in 2013, after being placed 70th in 2009.

The Egyptian National Competitiveness Council (ENCC) is an independent policy advisory body established through the efforts of several Egyptian businessmen, academia, and many partner organizations. It is the first non-governmental organization (NGO) to focus primarily on the issue of competitiveness in Egypt and the Middle East.