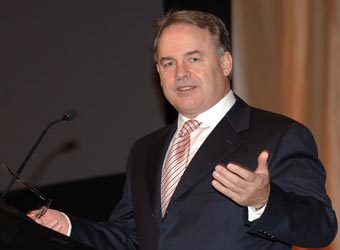 A compromise deal between the Irish government and Aer Lingus over the airline’s pension deficit is in the works, opening the door to a possible takeover of Dublin’s 25.1 per cent stake by Abu Dhabi-based Etihad.

“All I’ve said is that if they were to open their books then we’d have a look at it,” he said, adding that the Dublin Airport-based company has a “pension issue” that would have to be evaluated.

That pension issue revolves around a deficit of €300 million which the Dublin government is looking to underwrite through a special bond issue in Ireland’s National Asset Management Agency.

That bond issue would clear the way for the Etihad purchase of Dublin’s 25.1 per cent stake in the legacy carrier.

Dublin has identified Aer Lingus along with other national assets such as gas and electricity agencies and forestry holdings, as being targets for disposal to raise up to €3 billion in funding. Ireland was forced to accept a €95 billion bailout from the European Central Bank and International Monetary Fund in November, 2010. As a result of that bailout, the government has adopted a severe austerity programme.

Last week, Aer Lingus reported a profit of €84.4 million, a showing that boosted its share price to the point where Dublin feels a sale would be worth while.