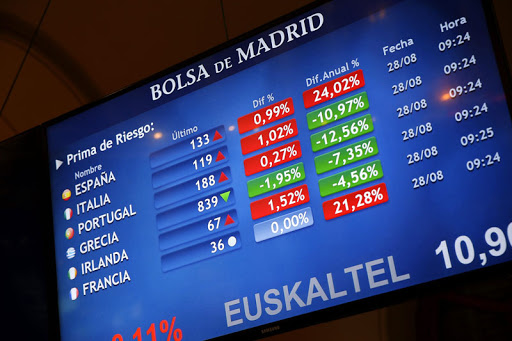 European stocks closed lower Friday as investors monitored the spread of coronavirus despite all the stimulus pledges by governments this week.

The pan-European Stoxx 600 closed down 3.2 percent, with autos and travel and leisure stocks dropping more than 5.7 percent to lead losses as all sectors and major bourses slid into negative territory.

European Union leaders failed to agree on how best to shore up economies h impacted by the coronavirus, which has now infected more than 533,000 people worldwide, according to data compiled by Johns Hopkins University.

Britain’s FTSE 100 was plummeting more than five percent during early afternoon trading in London. Stock markets in Germany and France are down over three and four percent, respectively.

The market fall comes as EU leaders fail to come to an agreement over the economic response to the coronavirus pandemic. EU policymakers have allowed themselves two more weeks to work out details, as death tolls in Italy, Spain and France, in particular, continue to surge.

The European Central Bank (ECB) has scrapped its cap on the quantity of bonds it can buy from any single euro zone nation, potentially paving the way for unlimited money-printing in a bid to mitigate the economic damage to the bloc.

Meanwhile, leaders of the G20 (Group of 20) major economies have vowed to pump over $5 trillion into the global economy in a coordinated effort to minimize job and income losses from business shutdowns around the world

Novartis: it’s ‘too soon’ to know whether malaria drug could be coronavirus vaccine