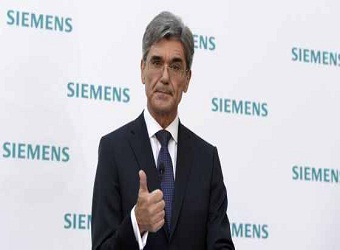 Kaeser said the inauguration of the first stage of the project’s new power plants in Beni Suef, Burullus and the new administrative capital will be in cooperation with their local partners and the Ministry of Electricity.

Ibrahim El-Shahat, who is supervising the building of the Beni Suef plant, said that 50 percent of the plant’s construction is complete.

The plant has an overall power capacity of 2,400 MW, El-Shahat said, adding that six gas turbines have been installed with a capacity of 400 MW per turbine.

The turbines were connected to the national electricity grid in November.

El-Shahat said that work is underway in the construction of the second stage of the plant, which will witness the installation of two gas turbines and four steam turbines.

The overall cost for the plant is €2 billion.

Electricity ministry spokesman Ayman Hamza said that work on the Siemens mega project is moving on schedule, adding that electricity minister Mohamed Shaker is closely following up on the construction process at the three plants.

In 2015, Siemens signed an €8 billion ($9 billion) deal with the Egyptian government to build three highly efficient combined-cycle power plants and 12 wind power installations at a capacity of 16.4 gigawatts.

The project aims to boost Egypt’s power generation capacity by around 50 percent by 2018.