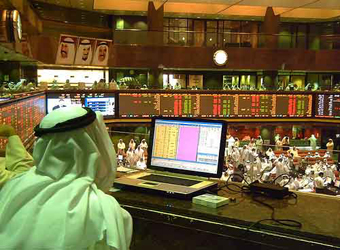 Gulf stock markets mostly surged at Monday early trade with Kuwait continuing a bull run that has made it by far the region’s best-performing bourse this year.

The Kuwait market is not cheap. NBK is trading at a trailing price-earnings ratio of above 14 times, for example, compared to below 12 times for Qatar National Bank and below 10 times for Abu Dhabi’s First Gulf Bank, Thomson Reuters data shows.

But fund managers said the volume of money pouring into the Kuwaiti market because of its momentum suggested the bull run might continue for a while.

Saudi Arabia’s index added 0.8 percent. Builder Khodari, which jumped 9.1 percent on Sunday on hopes for a recovery in the Saudi construction sector after the government began paying overdue debts to companies, rose a further 2.6 percent.

The bank reported an 84.8 percent decline in fourth-quarter net profit to 35 million riyals ($9.6 million). Three analysts polled by Reuters had forecast on average the bank would make a quarterly net profit of 215.58 million riyals.

But Doha Bank also said its board was recommending a cash dividend of 3 riyals per share for 2016, the same level as in 2015.