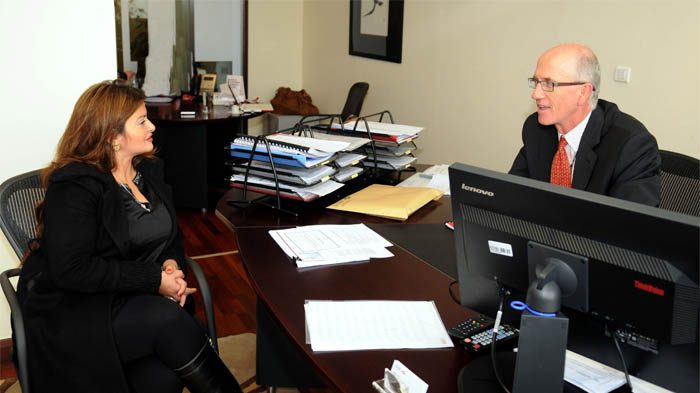 Andrew Long, head of HSBC’s operations in Egypt, talked about the strength of HSBC in the 80 countries where the bank is operating including Egypt, affirming that the second wave of the global financial crisis amid Eurozone and the political instability of Arab spring countries have not affected the bank’s activities.

In an exclusive interview with “Amwal Al ghad”, Long said that HSBC’s Business in those countries is safe, and bank does not have any concern of the sovereign debt crisis in Europe.

“The bank applied intensive precaution procedures to avoid risks through the development of provisions and continuous communication and coordination between branches around the world, as well as the diversity of sectors in which we operate, Our presence in 80 countries around the world has enabled us to achieve good business results over the past year,” Long said.

He added that the bank raised its capital, in January, with $ 100 million (EGP 560 million), for the total of the bank’s capital to be EGP 2.3 billion.

Head of HSBC’s operations in Egypt said that the country is qualified to become one of the fastest 20 economies in the year 2025, according to studies conducted by the Bank, due to the diversity of its sectors, this growth is subjected to the stability of the political and security situation. “We aim to expand in both horizontal and vertical levels and supporting all banking activities” he added.

He pointed out that during the first half of last year the bank postponed its collectible interest on clients in sectors affected by the revolution events, notably the tourism and real estate sectors in a step to support its clients to overcome the crisis.

Long adds “Egypt is one of the most important countries for HSBC and we have an expansion plan by targeting good growth in all activities according to the rules and regulations of good credit, in addition to strengthening our network of 100 branches to spread all over the country”

He said that the short-term vision of Egypt is not clear because of political upheaval, which has been reflected on the economic conditions and high risks. “This was not a major concern as we acquired a sufficient experience through our presence in many emerging countries, which have passed these conditions, however, we wish for more stability in Egypt amid the second half of this year, after finalization of the Constitution and the presidential elections, Then, Egypt will able to attract investments once again.”

Talking about risks related to stumbled customers on the events followed the revolution, Long affirmed that this period was a difficult one and has been reflected in all economic sectors with varying degrees, leading to a very small percentage of customers who faced problems in payment who will be supported by the bank to get over circumstances, through deferred installments.

He affirmed that bank is carefully selecting its clients and their studies before proceeding with any loans claiming that HSBC is immune from the events which followed the revolution adding that banking sector, in general, were not greatly affected.

He added that the bank has made sensitivity testes for the loans portfolio and taken all necessary provisions to cope with instability, expecting that the tourism sector will significantly flourish with the beginning of 2013.

About the successive reduction of the credit rating by IRAs, Long confirmed that it has a significant negative impact on the flows of investment, whether foreign or domestic, adding that this downgrade affects largely on the size of the reserve cash to Egypt, and impede the borrowing of abroad, as well as their inability to issue bonds in international markets, and in case of success in it will be interest rates too high, given the high risk of external debt and Egypt’s internal long-and short-term which makes the orientation of bonds on international markets during the current period is not appropriate.

On the Other hand, Andrew Long affirmed that the current situations will not affect the bank’s presence in Egypt and no layoffs are considered, adding that employment will be always linked to the size of investments and not the process of profit and loss only.

Long affirmed that the Bank has a good plan for expanding in financing small and medium enterprises in Egypt, which has a good growth profitability records, through a specialized department for funding this sector, pointing out that this sector represents about 90% of the Egyptian economy.

About Mortgage Finance, He said that real estate sector is one of the most prominent economies in Egypt. “Despite the bad conditions witnessed by the country, Real Estate will always have a great opportunity because of large gap between supply and demand in market, no doubt the market will be always attracting for more investment.”

On the other side when we talk about demand we are talking about purchasing power and the ability to pay premiums and the economy’s stability.

About increasing interest rates Long affirmed that Higher interest rates in the market during that period is natural as the government’s should rely on the domestic market to cover its budget deficit, also higher rates are good opportunities for foreign investors to take advantage of the high return on governmental debt instruments.

“Egyptian economy has many diversified tools, which qualifies it regain its performance and once stability returns, Egypt will be one of the most important markets in the region and the most attractive for foreign investment,” he said.

Andrew Long pointed out that the bank is not worried of an expected Islamic rule in Egypt, affirming that the bank has a considerable experience in this sector & can keep pace with all the variables, to support its customers and the economy.

HSBC may provide Islamic banking products in once central bank approval an Islamic license for the bank. HSBC is widespread all over the world and has the ability and experience to cope with market needs and requirements, both worked in a Muslim and commercial businesses, he said.

Long add that the bank can apply some changes of services provided, to coop with the Islamic movements in Egypt.

“If Islamists took over this will just represents democracy, which in turn will be supported by all sectors of the economy by attracting new investment and will be positively reflected in banks, enabling it to increase its activity. Whether Islamic or commercial, Market will choose.”