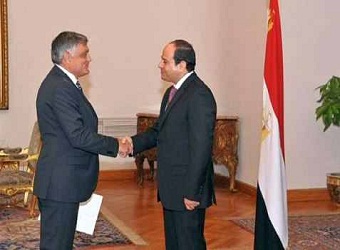 A new Israeli ambassador to Egypt presented his credentials to President Abdel Fattah el-Sisi on Sunday, perhaps heralding the start of a new era as well. There has been no Israeli ambassador in Cairo since Israel’s embassy was torn apart by a rioting mob in September 2011.

Ambassador Chaim Koren presented his credentials in a ceremony at the presidential palace in Cairo. In his previous post, Koren served as Israel’s first ambassador to the emerging state of South Sudan.

He technically began serving as Israel’s ambassador to Egypt three months ago, working from his personal residence in Cairo. Since he has yet to find an office in the nation’s capital, he will continue to work from his residence there for the time being.

Israel’s government was encouraged by Egypt’s acceptance of Koren’s credentials and saw it as a sign of good relations between the two nations, the foreign ministry said in a statement.

As a follow up, government officials “would be pleased if Egypt were to instruct their ambassador to return to Israel,” said a diplomatic source quoted by the Hebrew-language NRG news site.

Egypt played a major role in mediating the current cease-fire between Gaza terrorist factions and Israel.

All Terrorists Must Be Targeted, Not Just IS: Sisi