Japanese man rescued after night at sea on surfboard 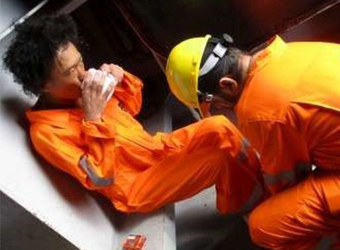 A Japanese surfer who spent a night at sea clinging to his surfboard has been rescued by the crew of a container ship off the east coast of Australia.

The 37-year-old told police a current had pulled him out to sea off Bulli Beach, 80km (50 miles) south of Sydney on Thursday evening.

Sailors on the MSC Damla spotted him floating about 6km offshore and pulled him on board using a lifebuoy.

They gave him food, drink and warm clothing and contacted the authorities.

A pilot vessel from Port Kembla returned him to shore. He was taken to hospital but discharged shortly afterwards.

“Our crew are always being observant of marine traffic, but it is exceptionally fortunate they were able to spot this man waving for help from his surf board,” he said.

The man had spent six hours trying to paddle back to shore before running out of energy, Inspector Darren Wood said.

He is estimated to have spent about 16 hours in the water but temperatures only dropped to 21 degrees during the night, preventing him from getting hypothermia, the Australian broadcaster ABC reported.

The safety organisation Surf Life Saving New South Wales said surfers should tell other people of their plans before setting out and be aware of local conditions, ABC said.

US visa-free residency for Cubans ends