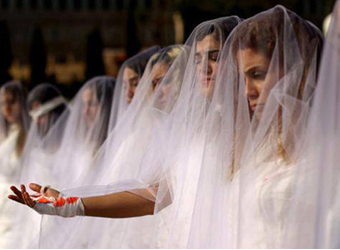 Women’s rights campaigners in Lebanon said they were confident that lawmakers were set to abolish a law that absolves convicted rapists of their punishment if they marry their victim.

Rights groups have led a campaign protesting the law on the grounds it sides with rapists rather than protecting victims.

Elie Kayrouz, a member of Lebanon’s parliament who sits on a parliamentary committee tasked with examining the law – article 522 of the penal code – said the committee had agreed to recommend its repeal.

“For article 522 there is consensus among all members of the committee to abolish this article,” he told the Thomson Reuters Foundation in a telephone interview.

But the committee has yet to issue a formal statement announcing its decision because it was still working on reforming other elements of the penal code, Kayrouz said.

In order to become law, parliament will have to vote on a bill following the parliamentary committee’s recommendations.

“It is likely that the parliament will pass … the repeal of article 522 as proposed by the committee,” said Rothna Begum, Middle East women’s rights researcher at Human Rights Watch.

Under article 522, authorities can overturn the sentence of a convicted rapist if he or she marries the victim, said Saja Michael, a spokeswoman for Beirut-based women’s rights group ABAAD, which has campaigned to abolish the law.

ABAAD’s lobbying included a protest this month in downtown Beirut of a dozen women dressed as brides with blood-stained gowns made from medical gauze.

“Looking at the momentum and feedback from different parliamentarians … it is now going to look very bad if the parliament does not agree with the abolition of the article,” Michael said in a telephone interview.

In a message on Twitter this month, Lebanese Prime Minister Saad Hariri threw his support behind plans to overturn the law.

“We will be waiting for the completion of this civilized step at the beginning of the next parliamentary session,” Hariri said in his Twitter message.

The rape of a woman in Lebanese society is often perceived as compromising the victim’s honor as well as that of her family, complicating the task of punishing the rapist, Michael said.

Despite Lebanon being one of the most socially progressive countries in the Middle East, more work needs to be done to protect the rights of women, she said.

In 2014, Lebanon passed a long-awaited legislation establishing for the first time important protection measures for victims of domestic violence.

But advocates expressed outrage at the law falling short of criminalizing marital rape.

Trump has less than a mandate, that means short leash