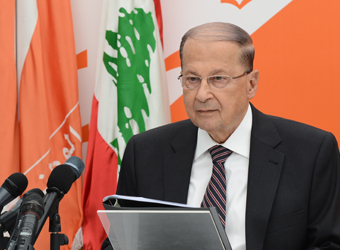 President Michel Aoun is expected to visit Egypt before long for talks with President Abdul Fattah al-Sisi, a trip that was purported to be part of his tour after Saudi Arabia and Qatar, but was postponed for pressing reasons, al-Joumhouria daily reported Saturday.

Cairo was planned to be the third destination for the President during his first trip abroad to Saudi Arabia and Doha. But, it was postponed due to al-Sisi’s engagement in pre-scehduled meetings, added the daily.

The Egyptian side has stressed its commitment that Aoun visits Cairo as soon as possible, which will be determined in coordination between the Lebanese and Egyptian presidencies, added the daily.

Aoun and an accompanying delegation of ministers concluded a Gulf trip on Thursday that included Saudi Arabia and Qatar.

The outcome of the trip was assessed as positive mainly with regard to improving relations between Lebanon and Saudi Arabia. Ties were tense last year after SA halted a $3 billion military aid program for the Lebanese army over what it said was the dominance of Hizbullah movement.