Merkel to meet with Sisi on 2 March in first official visit to Egypt: Germany’s spokesperson 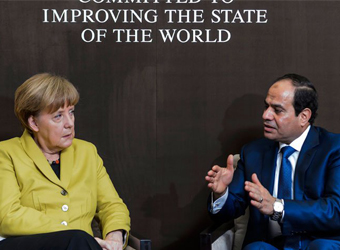 German chancellor Angela Merkel is set to arrive in Egypt on 2 March for her first official visit to the country, where she will meet with Egypt’s President Abdel Fattah al-Sisi, German government spokesperson Steffen Seibert announced on Friday in a press conference in Berlin.

Merkel, who will be accompanied by a high-level economic delegation, will discuss with Sisi economic ties, counter terrorism efforts, security in the region, irregular migration, and the Libyan civil conflict, according to Egyptian state news agency MENA.

In January, Merkel and Sisi discussed in a phone call cooperation in counterterrorism efforts as well as recent regional and international developments.

Egypt and Germany have strengthened relations over the past few years.

Earlier this year, Germany removed restrictions on flights to South Sinai implemented in 2015 after a Russian passenger jet crashed shortly after taking off from Sharm El-Sheikh International Airport.

Germans accounted for the greatest number of tourists to visit Egypt in 2016, at 655,000 people, according to a foreign ministry statement.

President Sisi met with the German chancellor in May 2015 during his first official visit to Europe.